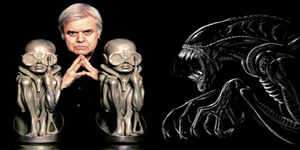 H.R. Giger was a renowned painter and artist famous for some of the most bizarre and frightening depictions on canvas, images that were also used by some of the greatest filmmakers in the entertainment industry.

Giger was the creator of the creatures used by Ridley Scott’s sci-fi classic film Alien. Giger’s work was also used in such landmark sci-fi and horror movies like Dune, Poltergeist II and Species. He was awarded an Oscar by the Academy of Motion Picture Arts and Sciences for his work on Alien.

His genius was so unique that professional psychiatrists were fond of using his images to help in the diagnosis of mental disorders in their patients. In fact, one of his earliest works was titled “A Feast for the Psychiatrist.”

Hans Ruedi Giger died today in a Swiss hospital at the age of 74.