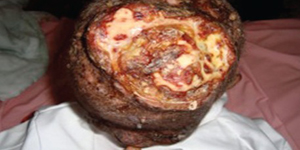 Reminiscent of an X-Files episode titled “Medusa” science fiction has come strangely close to reality in the small Brazilian village of Araras.

“Medusa” had Doggett and Scully hot on the trail of a string of bizarre deaths below the streets of Boston in that city’s subway system. The victim’s flesh appeared to just melt away.

In the real world of one of South America’s largest countries this scenario appears to be playing out except there is no John Doggett and Dana Scully to save the day. The disease the villagers are fighting looks to be a rare skin disease known as xeroderma pigmentosum (“XP” for short) and is a genetic disorder.

Those afflicted cannot tolerate any kind of sun or ultraviolet exposure to their skin as their immune systems are unable to repair any damage done eventually leading to a sloughing-off of the affected layers of epi and sub-dermal layers giving the appearance of melting flesh.

With various forms of agricultural work being the norm for most inhabitants of the area the increase of this disease is mounting since there is no known cure from the painful debilitating effects. The only way to slow its progression is total avoidance of sun exposure, something very difficult to do in a region dominated by sunlight and its ultraviolet rays.