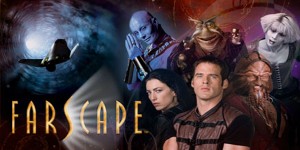 Farscape on the big screen? Not only could it happen…..it is going to happen according to series creator Rockne S. O’Bannon.

Tor.com has reported that the script will follow the Keith R.A. DeCandido (Done the Impossible: The Fans’ Tale of ‘Firefly’ and ‘Serenity’) comic book takeoff of the television series which centers on D’Argo, the 19-year old son of John Crichton (Ben Browder) and Aeryn Sun (Claudia Black) — named after Ka D’Argo (Anthony Simcoe), one of the main characters from the original TV show. John and Aeryn returned to Earth to raise baby D’Argo but now that he has become a man he is ready to go back into space with both his parents.

The script is being overseen by screenwriter Justin Monjo (Farscape, Bait). O’Bannon was quick to say that although production has yet to begin he is optimistic now that a script is forthcoming. “We’ll keep our fingers crossed,” stated O’Bannon.

Bringing Farscape to the big screen has been a long sought after dream of O’Bannon but co-creating such huge television hits like Warehouse 13, Defiance and NBC’s Revolution has kept him pretty busy of late. Now with the winding down of Warehouse 13 he has a little more time to dedicate to that unfulfilled dream.