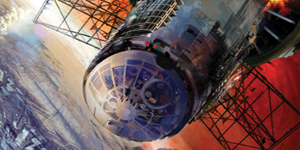 Last month Slice of SciFi reported that The Syfy Network finally got a clue and will be returning to its roots with science fiction shows geared more to its roots in space opera projects similar to its Peabody Award winning series Battlestar Galactica. It appears that Syfy is making good on that promise, even if it has cost fans great programs like Warehouse 13.

The NBC Universal/Comcast owned cable network announced it has given the go for a 10-episode dramatic outer space series called The Expanse. Set in the distant future (200 years from our current date) the story follows the adventures of a detective and starship captain following a cold case of a missing young woman. What neither know is their investigative journey through the solar system will lead them to the unraveling of a mysterious conspiracy that could negatively change human history forever.

Based on the New York Times bestseller “Leviathan Wakes” by authors Daniel Abraham (aka James S.A. Corey) and Ty Branch The Expanse could be expanded beyond this first 10-episode arc and continue based on the sequels to the first novel if it proves to be a ratings winner for the network.