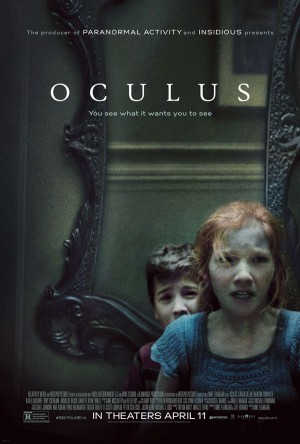 Oculus is a supernatural horror movie about a haunted mirror that stars genre faves Karen Gillan (Amy Pond from Doctor Who) and Katee Sackhoff (Starbuck from Battlestar Galactica). The film is well paced and immediately draws the audience in as it introduces the character of Tim Russell, a man on the cusp of age 21, who will soon be released from years of juvenile detention for an as-yet undisclosed crime. Upon release, he reconnects with his sister Kaylie (Karen Gillan) who he has not seen since the events that put him in detention more than a decade before. The film cuts back and forth between scenes of Tim talking to his psychologist, Kaylie working with an auction house that is selling a slightly damaged antique mirror, and scenes of a family that has moved into a new house and has purchased a mirror that looks very much like the one in the auction house. As the story progresses it becomes apparent that we are witnessing not one linear timeline but rather a narrative jumping back and forth in time to reveal a dark and sinister secret.

The selling points of this film for genre fans are obvious. It is a pleasure to see Karen Gillan on screen playing a character different from Amy Pond, and Katee Sackhoff pulls off a role that is haunting with some genuine shock value. The characters are introduced in a manner that is intriguing, and we quickly find ourselves wanting to know what happened and where the story is heading. About halfway through the movie, however, the disjointed nature of the narrative ceases to be intriguing and starts to become annoying. What could have made for a good hour-long episode of, say, Doctor Who or X-Files, overstays its welcome and begins to lose its focus. Ghostly apparitions that at first appear as frightening glimmers in a hallway are later exposed to be nothing more than people dressed up in makeup with glowing lights in their eyes. The horror movie clichés become increasingly cheesy and predictable, and we can see the ending coming from a mile away.

In the end, I can’t really recommend Oculus. I do think, on the whole, it’s a well-made low budget horror film. It’s well acted, has a good sense of narrative pacing, and draws the audience into its mystery. However, it overstays its welcome and loses its focus. The story is ultimately predictable and the ghostly figures are ultimately somewhat laughable. Most significantly, it just isn’t all that scary. There are other horror films I’ve seen in recent years that made me think twice about going into a dark room by myself late at night. After seeing Oculus, I slept like a baby.