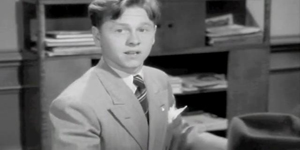 Mickey Rooney has been acting my whole life and the entire life of my 85 year old mother. This legendary actor died on Sunday after a career that spanned nine decades.

Beginning as a child star in motion pictures in the Roaring 20’s he managed to roll out an impressive 340 big and small screen appearances. His first was a short in 1926 (age 5) titled Not To Be Trusted and his final film, Old Soldiers, is currently in pre-production. Along with Old Soldiers Rooney has two other films awaiting release — Fragments From Olympus: The Vision of Nikola Tesla and Dr. Jekyll and Mr. Hyde. The latter is due out in theaters October 4, 2014.

Rooney starred in every genre of film, television and stage imaginable. Some of his sci-fi, fantasy and horror films include Night At The Museum, Sinbad: The Battle of the Dark Knights, Conan (TV Series), Kleo, the Misfit Unicorn with several guest appearances of classic The Twilight Zone and Rod Serling’s Night Gallery. His animation voice work included such hits as Pinocchio, The Fox and the Hound, Pete’s Dragon and The Happy Elf. However, for a certain generation Mickey will always be the original Andy Hardy of the early Hardy Boy films and Mi Taylor from National Velvet with co-star Elizabeth Taylor. He had his own self-titled television show in the 1950’s and again in the 1960’s and guested on nearly every TV variety, drama and comedy show from the beginning of television.

Rooney’s other memorable films that brought him critical notice were Boys Town, Babes In Arms, The Black Stallion, A Midsummer Night’s Dream, Captain’s Courageous, Breakfast At Tiffany’s, The Bridges at Toko-Ri, Requiem For A Heavyweight and his Emmy Award winning performance in Bill.

Mickey Rooney, a true American heavyweight is dead at age 93.