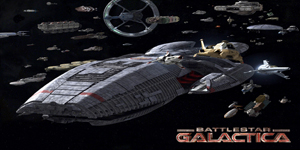 According to Variety, Glen Larson is set to produce a big screen reimagining of his original TV series Battlestar Galactica. Larsen was showrunner for the late 1970’s version of the show which featured Richard Hatch, Lorne Greene and Dirk Benedict in the lead roles.

Twenty-five years later Ronald D. Moore and David Eick reimagined the show which starred Edward James Olmos, Mary McDonnell, Katee Sackhoff and Jamie Bamber as the leads for what turned out to be a much darker, grittier and heart-wrenching Peabody Award winning sci-fi drama that captured the imagination of millions of viewers each week. Larsen served as a consultant for the Moore/Eick miniseries and during the four seasons of the millennial series.

Universal Pictures has called Larson back to show run the new film production and has signed on Jack Paglen (Transcendence) to draft the screenplay.

We will keep you updated on this latest development.