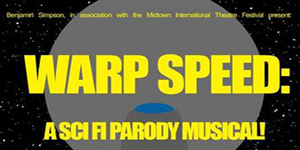 New York, NY– WARP SPEED: the Sci Fi Parody Musical, previously titled Where No Man Has Gone Before: The Unauthorized Star Trek Parody Musical, which will debut at the Midtown International Theatre Festival’s Commercial Division, has announced it’s intention to move Off-Broadway following the festival. “Audience response has been so staggering”, said Executive Producer Benjamin Simpson, “that we are considering moving the show sooner than expected”.

The show, written by Clara Hoch and Eva Thorpe, had a very successful workshop in DC last year followed by a concert at NYC’s Metropolitan Room. This new production will be helmed by Director/Choreographer Christopher Noffke. “Tickets for the festival run will go on sale in April, and more information about a potential Off-Broadway move will be announced then.” said Simpson. Casting for the show will begin in early may. For all the latest please visit www.WarpSpeedtheMusical.com and follow the production on facebook (www.facebook.com/warpspeedthemusical) and Twitter (@warpspeedparody).

The show follows the misadventures through space of the crew on the Starship Interstellar: Dr. Connie Von Evul finds herself newly employed on the Interstellar and quickly overwhelmed by the hyper and flirty Captain Jerk and his eclectic crew. They are soon distracted, however, by the distress signal from another ship, The Valiant. Jerk directs the crew to go after their fellow ship, but in the process they run into a radioactive field, which mysteriously gives Dr. Vonevul and crewmember Conrad Badguy special powers that slowly take over their sanity as they begin to take over the ship. Will they be able to retain their humanity? Who will win Dr. Vonevul’s heart? Will Schlock be able to overcome his Uncomfortable Bowel Syndrome to find love? And why is Jerk such a dick? All this and more will be answered in Hoch and Thorpe’s Fon Porr Fest of a musical Warp Speed: the Sci Fi Parody Musical!