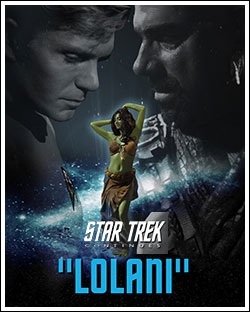 Star Trek Continues has launched its second episode after an impressive release of its first titled “Pilgrim of Eternity;” see my review of that debut episode HERE.

This second episode is called “Lolani,” which is the name of a female Orion slave that comes into the custody of Kirk and crew aboard the Enterprise after coming upon her in a disabled Tellarite transport ship. Lolani is the only survivor and is brought onboard the Enterprise while Spock and Security Chief Drake (Steven Dengler) investigate how the crew of that ship came to their deaths.

The storyline fits quite nicely into the realm of TOS Trek as it uses the future to tackle such current topics as individual freedom and expression for oppressed peoples, something Star Trek has always excelled in and this new expression of the franchise under the guiding hand of Vic Mignogna appears to be following suit, quite successfully.

The actors in this second episode seem to have settled into their roles very comfortably giving the appearance that the original series is truly continuing on unabated by the passage of nearly five decades since it first aired.

Mignogna offers another convincing performance as Captain James T. Kirk, the most realistic since Mr. Shatner and the current big screen Kirk, Chris Pine. All the other actors from the first episode have returned as well with Larry Nemecek back in sickbay as Dr. McCoy, Todd Haberkorn remains at the science station as First Officer Spock, Chris Doohan continues on as Scotty, Grant Imahara returns as Mr. Sulu and Kim Stinger is at her communications console as Lt. Uhura. Also back is the new ship’s counselor Dr. McKenna convincingly played by actress Michele Specht.

In the first premiere episode they brought out the big guns by having stage and screen actor Michael Forest reprise his original Star Trek role of Apollo. For “Lolani” another set of big guns was brought on board with the appearance of The Hulk himself, Lou Ferrigno as the antagonist, an Orion Slave Trader named Zaminhon. Without any doubt this is probably the most dialogue Ferrigno has ever been given for a role and he was outstanding. The episode was really taken up a couple of notches once he entered stage left. Fiona Vroom was quite good as Lolani and supporting characters such as transporter tech Ensign Kenway (Matthew Ewald) gave the episode it’s heartfelt Kevin Riley moment.

“Lolani” was written by Paul Bianchi, Huston Huddleston and Vic Mignogna with Chris White (“Taken In”) sitting in the Director’s chair.

On a scale of 1 to 10 with 10 being the best “Lolani” rates an easy 8.5. It was thoroughly watchable with rarely a boring moment. All the actors seem to be very much at home in their roles as these iconic characters and delivered them flawlessly without effort or the need to make it appear rushed, especially Mr. Mignogna as Kirk. Even Haberkorn, Imahara and Nemecek’s performances as Kirk, Sulu and McCoy were more fluid in this second outing and are really beginning to grow on me. The best in the ensemble cast continues to be Chris Doohan as Chief Engineer Montgomery Scott, the role made famous for four decades by his late father James Doohan. Chris was born to play Scotty.

I enjoyed this second episode of Star Trek Continues and eagerly await the next and hopefully many more down the road.