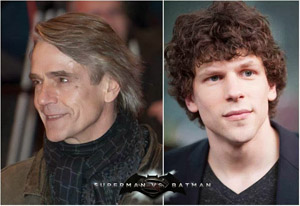 If you think critics and comic fans had a field day when it was announced that Ben Affleck would be director Zack Snyder’s actor of choice to don the Bat Suit for the next Batman/Superman collaboration movie then wait until you read this bit of news.

Word out of Hollywood is Snyder has made another bold (or silly) acting choice for the part of the nefarious and quirky Lex Luthor in the upcoming superhero flick. His pick is said to be The Social Network star Jesse Eisenberg.

Other interesting casting news is a report that Oscar winner Jeremy Irons (The Borgias) has signed a deal with DC Pictures to play Bruce Wayne’s loyal butler Alfred, a role made totally believable again by Sir Michael Caine in the Christopher Nolan Batman films. This casting of Irons is a welcome sigh of relieve for fans of the franchise. Nolan raised the bar with his films and Jeremy Irons as Alfred at least continues that effort.

Casting rumors continue to abound for the Superman vs. Batman movie. One such round of gossip is Joaquin Phoenix will appear in either a cameo or in a more substantial role but this cannot be confirmed at this time.

Needless to say Superman and Batman fans are livid about the Eisenberg news and the film still has two years until its expected release date of May 2016. Question is – What more crazy unexpected casting ideas does Zack have saved up for us all. And, will he end up being seen as a Svengali-like genius in the end?