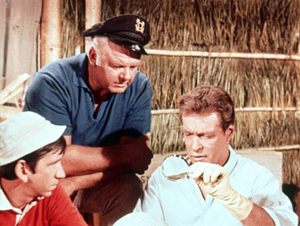 One of the icons of 60’s television has died. Many only know Russell Johnson (pictured on the left) as “The Professor” from Gilligan’s Island, the show that gave the relatively unknown character actor his real shot at TV stardom and set his face forever emblazoned within the minds of literally millions of viewers, likely, forever.

Thanks to syndication Gilligan’s Island and The Professor will live on for many generations to come winning over new fans not yet born.

What few remember is that Johnson was a decorated WWII aviator with over 44 combat missions under his belt as a B-25 bombardier. He was shot down over the Philippine Islands by the Japanese in 1945 near the end of the war. He is the recipient of the Purple Heart and the Air Medal, as well as the Asiatic-Pacific Campaign Medal with three service stars. He was also awarded The Philippine Liberation Ribbon and the World War II Victory Medal.

Johnson was residing in his beloved State of Washington when he died of natural causes in a hospice at the age of 89. He was surrounded by his wife and two children.

Wells commenting on the death of Johnson said, “My two favorite people are now gone. The professor passed away this morning. My heart is broken….Russell was a true gentleman, a good father, a great friend, and ‘the rest.’”

Bob Denver who was the main character in the sitcom died in 2005 of cancer. Alan Hale Jr., who will forever be known as The Skipper despite his successful character actor film career before the TV series, died in 1990 at the relatively young age of 68 from a rare form of thymus cancer.