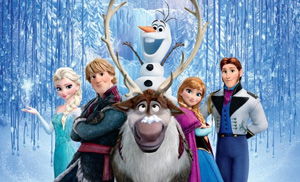 On Sunday Disney walked away with the top Golden Globe prize for Best Animated Film with “Frozen.” The story centers around characters Anna and Kristoff (voiced by Kristen Bell and Jonathan Groff) as they set out on an unforgettable journey to find Anna’s sister who has been mysteriously trapped in the Land of Eternal Winter.

The animated film was co-directed by Chris Buck and Jennifer Lee from a screenplay penned by Lee, loosely based on a story by the 19th Century fantasy writer Hans Christian Andersen. Many of Andersen’s works have been adapted for animation and live-action by Disney including, The Little Mermaid, The Princess and the Pea, Thumbelina, The Ugly Duckling and others.

News out of New York is the Golden Globe winning film will now be adapted for the Broadway stage. This will not be the first Disney production to make it from big screen to the Great White Way. The Lion King, Beauty and the Beast are two in particular that fit well as stage productions and Disney CEO and Chairman Bob Iger told Fortune in a recent interview that he thinks Frozen will also be a good fit for the big stage.

Frozen proved to be a huge box office success for the famed studio second only to their mega-blockbuster The Lion King. Many in Hollywood are convinced that Frozen will surpass the $669 million benchmark set by The Lion King.

Disney is still in planning and in negotiation but is feeling no need to hurry the process of moving Frozen from film to stage. Iger was clear that as far as he is concerned, “We’re not demanding speed, we’re demanding excellence.”