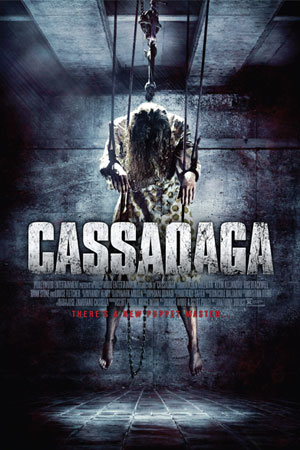 Cassadaga is a movie about a deaf schoolteacher, Lily Morel, who loses her sister in a tragic car accident. Devastated by the loss, Lily starts her life anew in the artist community of Cassadaga. Out on her first date with Mike (played by True Blood’s Kevin Alejandro) she winds up with a group of people who go from a bar to visiting a late night psychic. Lily pays the psychic so that she can reconnect with the spirit of her lost daughter. In the process, however, a vengeful ghost is summoned that begins to haunt Lily with terrifying death images. In order to rid herself of these images, she finds herself forced to investigate the circumstances surrounding the disappearance of a young woman and ultimately coming face-to-face with a deranged serial killer.

When I watched the opening sequence of this movie, I had to roll my eyes at how cheap, poorly produced, and poorly acted it appeared to be. However, once the main character was introduced I found the film much easier to settle into and for a while I was genuinely intrigued to see where the story was going. The idea of a haunted, deaf protagonist sneaking around the house of a suspected killer seemed like one ripe with possibilities for Hitchcock-style suspense. I was curious to see how things would evolve between the Lily and Mike characters, and what sort of frightening images would come from her encounters with the vengeful ghost.

Unfortunately, Cassadaga is a film that never really delivers either in scares, suspense, or unexpected plot twists. After about the first hour, of this nearly two hour long movie, I found myself getting bored and wondering when it would end. The protagonist’s deafness often seems to be ignored by the director and is never fully exploited as a plot device to drive suspense. The relationship with Mike turns out to be somewhat superfluous and unnecessary, and the ghost is really anything but scary once you realize what it’s up to.

All of this would be fairly ho-hum as is, but is particularly aggravating if you’ve seen the trailers that seem to promise a terror-filled supernatural suspense thriller. What is advertised as an exercise in suspense and terror ultimately turns out to be little more than a cheaply produced, overly long episode of something I’d expect to see in a show like the X-Files or Fringe.

It’s a very average, predictable storyline that overstays its welcome and ultimately fails to deliver.