Growing up in a fundamentalist religious household, there were two types of television shows: Ones that were acceptable for me to watch and ones that were unacceptable, for someone my age. While I knew the ones that my parents didn’t approve of, wrestling, reality television, and Ren and Stimpy, late night expeditions to the Sci-fi Network—now called Syfy — showed me strange and uncomfortable programs of twisted other worlds that occasionally expanded my mind into a new, unknown territory.

Twilight Zone, promised me tales of another dimension of sight and sound and showed me the morals of society, all while stimulating my brain for aliens, monsters, and the occult. Confused if Twilight Zone was acceptable programming for me or not, I stayed up late many nights, sneaking in as many episodes of Rod Serling’s masterpiece series as I could. I am nowhere near as old enough to have appreciated the show when it was new, but I found that being such a classic, I could relate with people much older than me. 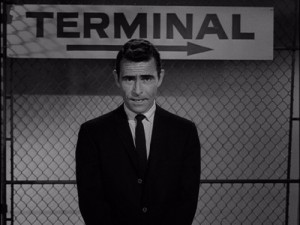 The Twilight Zone: The Complete Series is a new offering from Image Entertainment containing all five seasons and one-hundred and fifty six episodes of the beloved science-fiction classic. Shown in its original black and white, 1.33:1 ratio, Rod Serling’s occasionally profound series looks good on the screen fifty years later. Over seventy-five hours of Twilight Zone are packed into this twenty five DVD set, but those looking for any extras or behind the scenes information will have to look elsewhere, this set is just for the show and nothing else. After watching a handful of episodes that I loved and a few that I had never seen, this set brought me back to the darkened living room of my childhood, watching Rod Serling preach ethics to a lowered volume and praying that my father didn’t discover my strange new education.