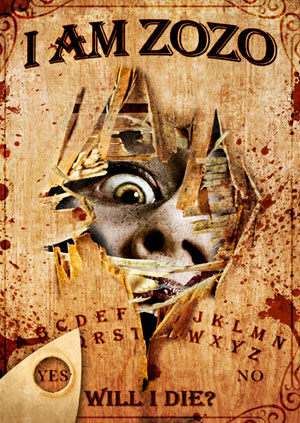 With the runaway popularity of low budget supernatural horror offerings such as Paranormal Activity, Insidious, and The Conjuring, I’ve been bracing myself for the onslaught of poorly made wanna-be copycat movies. I approached I am ZoZo with some trepidation, concerned that I may have to sit through a 90-minute movie containing some 80 minutes worth of filler that was shot to pad out roughly 10 minutes in which anything actually happens. Instead I was treated to something that was, on the whole, entirely watchable and which contained some moments of genuine suspense and tension. While ZoZo does not reach the pantheon of the aforementioned blockbusters, it serves as a creepy little offering in its own right and is certainly worthy of consideration for fans of this genre of filmmaking.

There are several things that I am ZoZo does right. First and foremost, it plays up the “based on a true story” angle, inviting its audience to believe that they are peering in on a recreation of a terrifying occult event. Whether this “true event” is entirely believable or not may be another question, but in establishing the story as something that actually took place, the film invites its viewers to suspend their disbelief and open themselves up to being scared by it. The DVD further offers extras to bolster its “true story” claims, such as an interview with a man who recounts his encounters with the ZoZo spirit and a “making of” featurette in which the filmmakers explain that they chose this story as their first step away from documentary filmmaking because of it grounding in a real world event.

The film casts a likeable girl as its protagonist, letting the viewers develop empathy and concern for her plight as she is drawn further into the designs of the occult powers that torment her. The movie was shot on Super 8 film, giving it a haunted, grainy, and rundown quality. The Ouija board communications with the ZoZo spirit are genuinely unnerving, and the movie may make you think twice about going to the bathroom alone in the dark.

There are a number of factors, however, that prevent I am ZoZo from becoming a genuinely great horror movie. This appears to have been an extremely low budget production and it shows. It features unseasoned actors and character development is minimal. While supernatural tension builds throughout the movie, there is never a payoff that quite reaches the level needed to be truly terrifying. ZoZo is an effectively creepy supernatural thriller, but it’s not an especially scary one. There are few scenes that would have you jumping out of your seat if you saw it in a movie theater, and there is little to no imagery that will stick with you after it’s over. In addition, while the film does not consist of my dreaded 80 minutes worth of filler, it does not always make the best use of it time and could stand to be tightened up in places. Finally, while the “true story” invites us to suspend our disbelief, some of what happens just seems a little too unbelievable. Without giving too much away, I just have to ask, if you were held captive and raped overnight by a supernatural entity while staying in a house in the middle of nowhere, would you be OK with sticking around to hang out with your friends and sleep in the same room again the following evening?

Overall, I would say I am ZoZo is recommended for fans of supernatural films based on true events and for those curious to see a feature shot in Super 8. It’s not a film that’s going to have mass appeal, it’s not the scariest film that’s out there, it lacks character development, and it’s low budget. However, if you are a believer in the supernatural or can suspend your disbelief and immerse yourself in the lore of the ZoZo spirit, it’s a spooky little horror movie with some genuinely creepy moments. This is a film that will make you want to avoid playing with Ouija boards, and may leave you wanting to sleep with the lights on after it’s over. 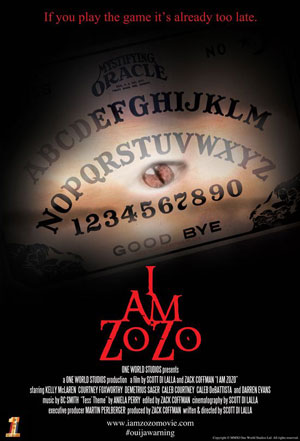 The film was produced by Zack Coffman and executive produced by Martin Perlberger. I Am ZoZo was filmed entirely on Super 8mm and recently received Best Feature and Audience Choice Awards at the 2012 US Super 8 Film Festival.

I Am ZoZo centers on five young friends who play with a Ouija board that inadvertently summons the malevolent Ouija demon “ZoZo.” The film’s horrific account of possession is based on widely reported real experiences with this ancient and evil spirit that attaches itself to people exclusively through Ouija boards.

Website: I Am ZoZo: Based on a True Ouija Board Story