Editor’s note: Yes, this week’s upcoming episodes of Legend of Korra will be the Book 2 finale. It’s a DVR thing… you understand

I love me some animation, and I adored Avatar: The Last Airbender (the animated series — not the movie, which we will never speak of). So when the sequel — The Legend of Korra — showed up last year, I made sure to watch it. 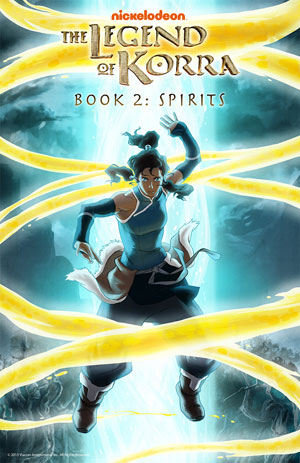 This show follows Korra, the teenaged Avatar, as she comes into her full powers and gets trained in how to actually use them, as well as how to be the Avatar. Of course, things don’t go smoothly and there are conspiracies to thwart, intrigues and mysteries to solve, lots of martial arts and element “bending”, action, and romance.

As with Buffy, The Vampire Slayer, it was clear that the production team had no idea if this show would be picked up for a second season, so Season One had a very strong beginning, middle, and, most key, ending.

Almost all the action took place in Republic City, though the rest of the world was acknowledged and occasionally shown. It was really good — keeping the world that we’d seen in The Last Airbender and growing it, since we’re now a couple generations from Aang and his crew; excellent animation; martial arts fantasy with a lot of steampunk thrown in — and it deservedly was renewed for several more seasons.

Season Two picks up nicely after the events of Season One are completed — not too long a time lapse, but enough that our main cast of characters are legitimately now in a different location, the South Pole, at least to start, and also legitimately embarking on what will be a new, and presumably longer, adventure.

The action begins immediately, and, happily, it doesn’t feel like there was a long break between the Seasons — Korra and her gang are back, as good as before, and, in many ways, better. We’re following two main storylines that separate and intertwine as the season goes on. One is the civil war brewing between the Northern and Southern Water Tribes and the other is Korra and Tenzen’s student-mentor relationship and how it’s tested and altered as the storyline goes on.

Korra’s going through a lot of teenaged growing pains, which make sense, but also which aren’t drawn out so long that you start hating her. The characters are shuffled up, and we’re seeing a larger world — families, new enemies, new allies, new and changing alliances, and a character who’s both hilarious comic relief and could be much, much more.

Speaking of comic relief, there’s a lot of it in this show. At minimum there are three main supporting characters who are almost always delivering punch lines, but every character can crack, or be the butt of, a joke. There’s a lot of humor in this series, easily as much as in any Spiderman iteration.

The Spirit World is playing a huge role in this season, and it’s a blast to be there. The rest of the world is great, also, building on the world we saw in The Last Airbender, but showing the changes several decades have made everywhere. Old friends from The Last Airbender also show up, which is a nice connection to the first show, but won’t confuse newcomers, either.

The animation is, for want of a better description, Americanized anime (you can tell without issue which are girls and which are boys), which I like, and, as with Kung Fu Panda, there’s usually a mesh of styles used. The voice work is uniformly good — you know who’s talking even if you’re not looking at the screen — and all the voices really fit the characters. The characters are all Asian, and represent different Asian cultures as related to their homelands and bending talents, but all filtered through an alternate-Earth-steampunk filter. It’s a cool, cool world.

The show recaps prior happenings at the start of each episode, so it’s not hard to get caught up enough to know what’s going on. And while there’s a larger cast and slightly more complex storytelling than in Season One, it’s done smoothly, so you can follow the action and story even if you’ve never seen one episode prior. This is a show you can join midway and still enjoy it and not be lost. Compared to, say, Full Metal Alchemist, which I caught a lot of, but not all of, and so, while I loved its style, I still have no freaking idea what was going on with that show. And because it’s a kid’s show, there’s a lot of reminders of what went on before, usually done via dialog, and never done in a klunky way, so you won’t be lost tuning in late but also won’t feel like you’ve tuned into The Power Rangers.

Now, the biggie. “It’s for kids.” Yeah, kinda. It’s more of a Young Adult show than a children’s show, and, for example, The Hunger Games is YA also. The themes in Legend of Korra are universal regardless of your age, the animation is topnotch, the setting is unique, the fight scenes are really well done, the voice work is great, and the storyline is compelling.

Give it a shot. It’s second season is as strong if not stronger than its first, and The Legend of Korra delivers on its promise to take you on a wild, magical, moving ride.