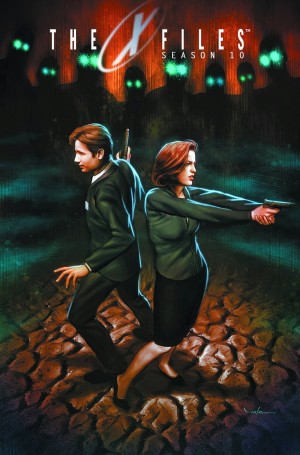 Following the success of several Whedon-verse series continuing their run in the pages of comics (Buffy, Angel and Firefly), it was probably only a matter of time until other comic publishers looked to other niche genre series from the same era. And with The X-Files celebrating its twentieth anniversary this fall, the time is ripe for special agents Mulder and Scully to return.

And so it is that we have the first collection of the new tenth season of The X-Files. The first five issues of the series is called “Believers” and it faces the unenviable task of trying to pick up the pieces of mythology from the final few years of the show and try to weave them into some type of coherent narrative.

Whether or not you think this collection succeeds probably depends on how you feel about the final years of the series. If, you’re like me, and you felt the series limped to its finish line and overstayed its welcome once David Duchovny decided to pursue a movie career, odds are you won’t exactly love the story presented here. If you were one of the die-hard X-Philes who found yourself yearning for more, even once the series killed off most of the interesting supporting cast in the final season, odds are you will probably eat this up with a spoon.

I’ll admit I fall into the first camp and that my approach to this book wasn’t helped by the fact that while convalescing from a broken toe, I took the chance to catch up a bit on The X-Files‘ fourth season. And while season four is when the wheels started to come off the wagon a bit in terms of the mythology, it was still at a time when the series was close to the top of its game and delivering consistently enjoyable, spooky and compelling installments.

“Believers” picks up the story after the last movie and feels almost like a two-part season premiere for the show. It’s heavily mythology driven, focusing a great deal on William and his role in the overall alien arc. The storyline also does a lot of heavy lifting to bring back certain characters to the printed page — characters who were led to believe were dead. Some of the explanations for how they survived I can buy, while others strained my willing suspension of disbelief.

Artwise, the comic is hit or miss. The characters are easy enough to identify, but they aren’t rendered even close to photo-realistic. In fact, I’d have to say the art is one of the biggest distractions from this collection.

I will admit that after these five issues worked so hard to get Mulder and Scully back with the old gang, I’m curious to see if season ten will be all mythology or if we might get a monster of the week story or two tossed in there as well. If I get a chance I may sample again, but I’m not going to actively seek out future entries from season ten.

In the interest of full disclosure, I will say that I got a digital copy of this collection from NetGalley in exchange for an honest review.