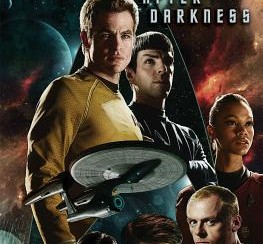 The latest collection of IDW’s re-imagining of classic Star Trek episodes in the rebooted universe picks up right after this summer’s Star Trek Into Darkness left off and finds Captain Kirk and the crew of the starship Enterprise finally heading out for their historic five year mission.

I’ve read several of the previous collections from IDW and found the results of adapting original series episodes into the rebooted universe to be hit or miss. Occasionally the series does something interesting or different with these familiar (at least to me) stories. For the latest four-issue collection, Mike Johnson goes after two of the bigger episodes from the original series run “Arena” and “Amok Time.”

Given that these two episodes are among my favorite from not only the original 79 but also the Trek franchise as a whole, my expectation level was high for them.

Which may be why I found the stories to be rather disappointing.

The “Amok Time” adaptation starts out well enough and puts some intriguing questions on the table, including the notion that with Vulcan gone, there are going to be complications for some under the influence of pon-farr. The concept that the blood fever and the urge to return home and procreate could drive certain Vulcan’s mad when they can’t return to their home world is a fascinating one and also one without an easy solution. Or at least that’s what you’d hope would be the case.

However, instead of really delving into this issue in an intriguing or creative way, the writing team takes the deux ex machina route out, turning to the trasnporter as the solution to just about any solution. (It slice, it dices, it makes fries!) The concept of Spock being driven mad by the blood fever and possibly being off the ship for an issue or two was intriguing enough. Also of frustration is how Spock’s need to return home to find T’Pring to help “cure” his blood fever and just how it doesn’t really have a huge impact on Uhura and their relationship beyond this three-issue storyline. I’m hoping future issues may delve into this a bit and examine some of the consequences of this.

Also included in this collection is a one-issue storyline that borrows elements from “Arena.” It’s nice to see the Gorn updated for the modern page, but the story honestly feels like a throw-away more than anything else. And that’s a shame given how good “Arena” was and some of the philosophical issues that episode raised. Little of that depth is on display in this installment. I will cut this one a bit of slack since it feels like this installment is picking up on a previous issue that I probably missed.

As for the artwork, I found the depiction of all the series regulars to be faithful and easy to identify. Given that one of my big complaints about the recent TNG/Doctor Who cross-over was (what I felt) was sub-par artwork, I’m glad to see that style isn’t crossing over to the rest of IDW’s Trek line.

All of this made me come away from this latest collection feeling a bit disappointed.

In the interest of full-disclosure, I will say that I was given an ARC digital copy of this collection via NetGalley.