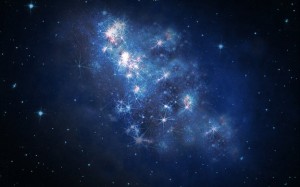 Scientists have confirmed the discovery of a new galaxy in our universe.

The new galaxy is located just above the handle of the Big Dipper and is the farthest galaxy yet discovered.   According to a team from the Keck Observatory in Hawaii, light from the galaxy took 13 billion years to reach Earth.

The newly discovered galaxy could also be a window into learning more about the creation of the universe.  The galaxy reportedly forms stars at an incredible rate of 330 per year. That’s a hundred time faster than stars are formed in our own Milky Way galaxy and could harken back to the universe’s early days when hydrogen gas for star formation was more plentiful.

“We wanted to figure out how galaxies evolve,” said Steven Finkelstein, lead author and University of Texas at Austin astronomer. “One way to do that is to push back deeper and deeper into the history of the universe.” The study was published online Wednesday in the journal Nature.

Astronomers were able to measure how far it was from Earth by analysing its color.

The team of astronomers used images from the Hubble Space Telescope to identify 43 possible faraway galaxies and then used state-of-the-art spectrographic equipment at the W. M. Keck Observatory in Hawaii to confirm their distances. In the end, Finkelstein and his colleagues could only retrieve data from this lone galaxy.

“We were first excited, then a little disappointed because we only saw one, and then excited again,” he said. “We would have hoped for some number bigger than one.”

Because the Universe is expanding and everything is moving away from us, light waves are stretched. This makes objects look redder than they actually are.

Astronomers rate this apparent colour-change on a scale that is called redshift.