Those who know me personally, know that Fritz Lang’s science fiction epic Metropolis is one of my favorite movies–so much so that I might have a half sleeve tattoo of it. The impact of the 1927 German expressionist silent film has influenced such modern works as the movies Star Wars, and Blade Runner, and musicians Janelle Monae, Queen, Madonna, and Lady Gaga. 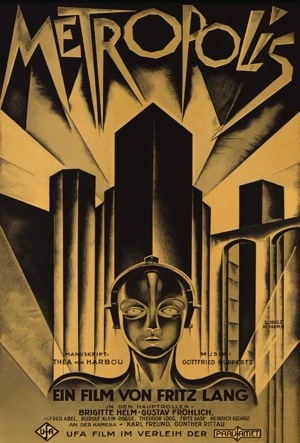 Metropolis’s story is one of social justice and romance, one that echoed the atmosphere of a 1920s Germany. Wealthy aristocrats live in the upper levels of the city of Metropolis while the worker class toils away at the machines that make the city run. The ruler of Metropolis’s son, Freder, ends up falling in love with the leader of the worker class, a beautiful woman named Maria. While searching for Maria, Freder descends into the lower levels of the Metropolis and sees the plight of his brothers, the worker class, and then trades places with a worker to experience a life of hardship. Robot dopplegangers, jealous mad scientists, and twisted, worker hungry machines fill the rest of the movie as well as a cast of around a thousand extras. With an underlying message of the need of balance between the upper class and the lower class and the need of balance between the mind and the hands within ourselves, Metropolis flows with an almost balletesque beauty that the silent era of movies did so well.

Hailed as the most expensive silent film ever made, Metropolis was a pioneer for movie special effects. The effects expert, Eugen Schüfftan, created the visual effects for Metropolis. Among the effects used are gigantic miniatures of the city, a camera on a swing, and most notably, the Schüfftan process, in which mirrors are used to create the illusion that actors are occupying miniature sets. This new technique was seen again just two years later in Alfred Hitchcock’s film Blackmail (1929). 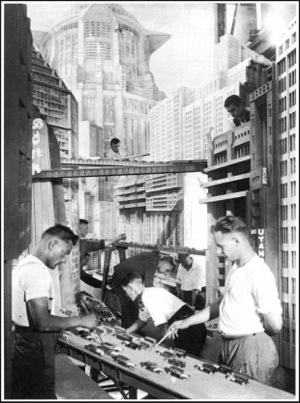 Metropolis began filming on 22 May 1925. The cast of the film was mostly composed of unknowns; this was particularly true of lead actress, nineteen-year-old Brigitte Helm who had no previous film experience. Shooting of the film was a draining experience for the actors involved, due to the demands made of them by director Fritz Lang. For the scene where the worker’s city was flooded, Helm and five hundred children from the poorest districts of Berlin had to work for fourteen days in a pool of water that Lang intentionally kept at a low temperature.

Lang would frequently demand numerous re-takes and would demand perfection from his actors. For example, it took three days to shoot a simple scene where Freder collapses at Maria’s feet; by the time Lang was satisfied with the footage he had shot, actor Gustav Fröhlich found he could barely stand. Lang’s insistence on using real fire for the climatic scene where the false Maria is burnt at the stake (which resulted in an actress’s dress catching fire), and his ordering extras to throw themselves towards powerful jets of water when filming the flooding of the worker’s city added to Lang’s already infamous strict directing style. 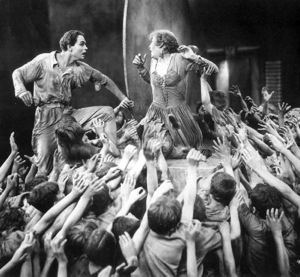 Upon release of the film, German critics hailed it as a masterpiece and some audiences responded to the most spectacular scenes with “spontaneous applause.” Nazi propagandist Joseph Goebbel was impressed with the film’s message of social justice. In a 1928 speech he declared that “the political bourgeoisie is about to leave the stage of history. In its place advance the oppressed producers of the head and hand, the forces of Labor, to begin their historical mission” Due to the interest from the up and coming Nazi party, Firtz Lang escaped Germany for America. The film was later recut for German audiences, removing its religious and “inappropriate communist subtext.” and the original version destroyed. American studios Paramount and MGM purchased rights to Metropolis and reedited the movie to ensure profitability to American audiences, thus removing the premiere cut from the Western Hemisphere.

The original premiere cut eventually disappeared, and a quarter of the original film was long believed to be lost forever, as reedited versions were the only ones to survive. In 1984, a new restoration and edit of the film was made by Giorgio Moroder. Moroder’s version of the film was tinted throughout, featured additional special effects, subtitles instead of intertitles and a pop soundtrack featuring well-known singers, instead of a traditional score. The film was nominated for two Razzie Awards including Worst Original Song for Love Kills and Worst Musical Score for Moroder. This version is on Netflix and I do not recommend watching it.

In 2008, an almost complete version of the film was located in Argentina. Edited together with a 2002 restoration attempt with the original orchestral score and title cards, Metropolis was finally restored back to its glory in a version that is as close to the premiere cut as possible. This version is also on Netflix and available on DVD and BluRay and I wholeheartedly recommend watching it.

Metropolis is truly one of the best silent films that has ever been made and is one of the first, massive budget blockbuster science fiction movies that influenced countless other films for decades to come.