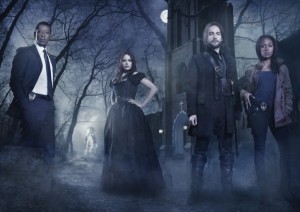 Fox’s freshman drama Sleepy Hollow got good news yesterday.  The supernatural drama has been given a green light for a second season.

The series follows a revived Ichabod Crane and modern-day police detective Abbie Mills as they attempt to save the town of Sleepy Hollow and the world from the forces of evil.  It’s been a solid ratings hit for Fox since its debut three weeks ago.

The debut episode drew the highest ratings for a Fox drama since 24 debuted.

Fox has committed to 13 episodes for the first season of Sleepy Hollow.  The renewal order is for another 13 episode that would serve as a second season.  No word syet on if season one will run 13 episodes or get extended to a 22 installments.

“The show has proven to be a risk well worth taking. It’s a conceptual blast unlike anything else on television and it all holds together with inventive writing and a fantastic cast,” Fox entertainment chairman Kevin Reilly says in a statement accompanying the pickup announcement. “I can’t wait for fans to experience what else is in store for this fall and even more of this wild ride into Season 2.”