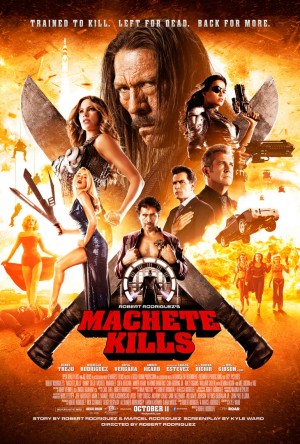 “They told me a long time ago that a busy man has time to do everything. I always kind of lived like that. My mom used to say, ‘Danny you always hated sleeping, you always felt like you were missing something.’ So, I get like 4 hours of sleep and then wake up and wonder what’s going on. A long time ago, I had to just put this whole movie making as my job period, I didn’t get into it until I was thirty nine, I hadn’t ever even been on a movie set. People then started to notice me. I had to get it down. Me and my mentor Eddie Bunker — he wrote a book called Education of a Felon — he kind of said that this is our job and this is what we do. It’s no different from a house painter or plumber, or writer. It’s our job. The only difference is instead of using a hammer or nails, we use our face.”

In Machete Kills, the titular Mexican Police detective-turned spy is hired by the President (Played by Charlie Sheen) to hunt down an insane revolutionary. Spawning from a fake movie trailer in the Robert Rodriguez film Grindhouse, Trejo was a little surprised that he would be still playing Machete Cortez, who he describes as a “Latin Dirty Harry meets Charles Bronson”, in the sequel to his first leading role.

“The first time we talked about Machete was twenty years ago during Desperado, Robert saw me and my character said, ‘Danny I have the perfect role for you.’ He was like, ‘It’s you.’ I wasn’t used to seeing someone that looked like me as a leading man. Robert kind of changed that, saying any man can carry a movie. I feel blessed that he used me. After Spy Kids and the trailer for Grindhouse, audiences would run us down and demand that we make this movie. We thought we were going to be done with it when we did the trailer, though.”

Trejo, who started his career as a boxing instructor for actor Eric Roberts for the movie Runaway Train, believes that hard work has always been the key to his success.

While the first Machete dealt with issues around illegal immigration and was released right at the peak of Arizona’s controversial SB1070 law, the sequel isn’t as topical. When asked how his own opinion on the intensely debated issue of immigration reform, Trejo had this to say:

“Within the next twenty years, we are all going to have to learn to coexist. There are 4% of people on the Mexican-American border that say we have an immigration problem. The other 96% are saying ‘Que dijo ese Hombre’. We have to find a way. There has to be some kind of reform. I don’t know what it is, but we have to do something. Pretty soon we won’t be borders anymore, we will be one planet.”