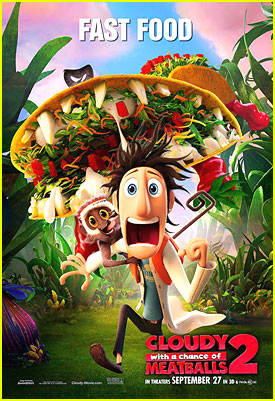 The original Cloudy With A Chance of Meatballs was an unexpected pleasure – a bright, quirky animated movie that was a lot of fun and never overstayed its welcome.

The follow-up installment tries to recapture the zany spirit of the original but unfortunately it falls a bit short.

Picking up moments after the original ended, Cloudy 2 finds Flint accepting his dream job from childhood hero, Chester V.  Chester V had his own TV show that inspired the young Flint and now runs the scientific research corporation The Live Corp Company.

Turns out that Chester is less interested in any of Flint’s new ideas and more interested in gaining control of the Flint’s device from the first film, which is malfunctioning on their island home and creating sentient food.  Flint and his gang of friends from the first movie head to the island to try and shut it down.

Filled with lots of puns, Cloudy 2 doesn’t quite have the same spark the original film did.   Part of that stems from the fact that the movie doesn’t hide the fact that Chester V is a bad guy from the first time he appears on screen making it feel like we’re just marking time until Flint puts all the pieces together and quits alienating his friends and family.

As the movie developed, I found myself wishing the film would concentrate more on the rift the developed between Flint and his father, leading to his father taking a group of sentient pickles out fishing. (Turns out they both share a love of sardines).  This storyline leads to some nice moments in the end of the movie, but you may find that you want more from this and less silly puns of the names of food animals.

Large chunks of this film feel more like reheated leftovers than a fully satisfying new meal.

And while young viewers will probably eat the movie up (it’s visually spectacular), older audiences may find themselves checking their watches.

Cloudy With A Chance of Meatballs 2 isn’t terrible and it was certainly a greater pleasure to watch than last year’s Sony Animation release of Hotel Transylvania.   But it didn’t quite live up to the fun of the original in the series.