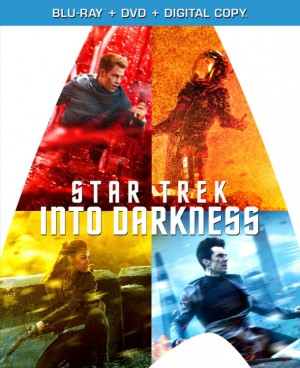 While Star Trek Into Darkness did a solid business at the box-office and garnered solid critical reviews, some fans were not happy with the latest journey into the final frontier.

Fans gathered at the recent Las Vegas Star Trek convention ranked the film dead last among the cinematic Treks and TrekMovie’s Joseph Dickerson recently ran an editorial about his perceived issues with the film, and steps he felt could be taken to fix the franchise.

Dickerson argues, “The best episodes of Star Trek never lost sight of this very simple statement, and still provided excitement as well as provocative ideas,” and he goes on to say that the franchise needs “has to once again be about exploring the unknown, about going beyond what we are comfortable with. About moving forward, finding out what’s “out there.”   Dickerson asserts now that the first two films have “put the band together,” that it’s time for the franchise to begin the task of exploring strange new worlds and seeking out new life and new civilizations.

As expected, the commentary has set off quite a bit of debate among Trek fans, and wading into that debate was one of the writers of the last two big-screen Trek outings, Roberto Orci.

In the comments field, Orci says, “I think the article above is akin to a child acting out against his parents. Makes it tough for some to listen, but since I am a loving parent, I read these comments without anger or resentment, no matter how misguided.”

He goes on to add, “Having said that, two biggest Star Treks in a row with best reviews is hardly a description of “broken.” And frankly, your tone and attidude make it hard for me to listen to what might otherwise be decent notions to pursue in the future. As I love to say, there is a reason why I get to write the movies, and you don’t.”

To help defend the latest Trek, Orci invokes statements made by Trek star Simon Pegg this summer in response to fan criticisms of the film.  Pegg said that fans who didn’t like the film could “Frak off.”  (Pegg used a more colorful metaphor in his comments).

Orci also debates several other fan comments about the film, calling several of them “poopy” (again we’re using a different colorful metaphor than the one Orci does because this is a family site) for the criticisms leveled against the film in the comments.

We can understand Orci’s frustration with fandom, but do you think this forum was the correct venue to engage fans?  And should Orci have made the comments he did?  What do you think of the entire debate?

Orci has since issued an apology for his statements via Twitter, but his account @boborci seems to have been shut down and removed now.

Some of his tirade and apology has been preserved in other articles:

Fans will get their chance to review the latest Trek feature as it hits home theater today.

However, the release isn’t without its own controversy.  According to several on-line sources, the extras on the disc are scant.  And while Paramount reportedly filmed extras on the making of the latest cinematic Trek for the Blu-Ray release, those extras are scattered across multiple, store-specific releases.  For example, the commentary for the film is not on the physical disc but is instead only available in the digital download on iTunes.    In order to get all the extras, fans may have to buy multiple copies of the film (both physical and digital) from several retail outlets.