There are a variety of free-to-play MMORPGs (Mass-Multiplayer Online Role-playing Games) of excellent quality right now on the market. I’m going to present the format of free play and its benefits and limitations, along with some games that use it. This will not be an exhaustive list by any means, there are simply more games than I have the ability to talk about here.

Typically; how these games make money is something called the ‘Item Mall’ across the games. The Item Mall includes things like experience boosters, vanity and cosmetic items to make your character ‘look’ certain ways or special items for play styles. A danger in Item Malls is something called ‘pay-to-win’ which replaces skill or time played with purchasing power.

Some games also include a subscription model that breaks the limits of in-game economic restrictions on the player, including the number of characters. Storage size for items might be increased, limits on the auction house for the game might be lifted as well. Whether a subscription is worth it to a player is up to the player; typically the hardcore players in game tend to be subscribed to avoid the restrictions. If you’re trying out a game, enjoy the free model and try not to spend so much in the item mall that would have been better for your wallet if you had subscribed. Just as a rule of play. 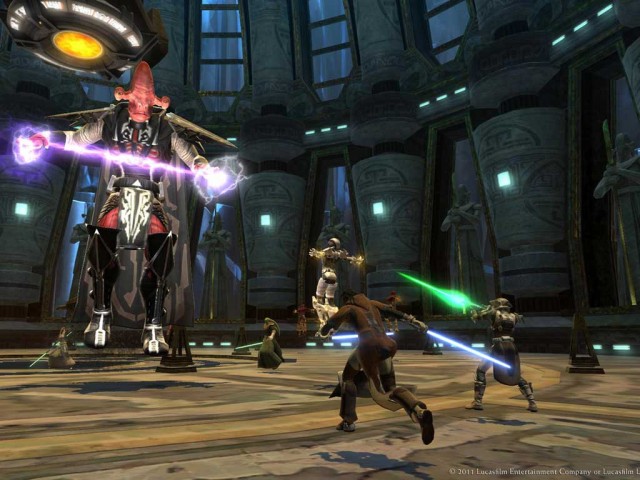 1. Star Wars: The Old Republic. SWTOR is an excellent place to start your MMORPG experience. It is a AAA title that went FTP and has been doing better for it ever since. You have the possibility of fighting on either side of force coin, the classes mirror each other. However; there eight distinct storylines you will be playing through as you level to end game. So there is a lot of value in creating alternative characters to see those storylines. By the time you reach 50-55 levels, you might want to think about investing in a subscription to the game in order to get around the free account’s many limitations, alternatively you can begin to purchase releases on individual features of the game as well. The elder game here is based on raids similar to other games; the quality, difficulty and variety are very good and challenging.

2. Rifts. Rifts is a fantasy MMO-title that refuses to give in to World of Warcraft over the years. What has been developed is a quality, raid-centric game that has recently gone FTP. One of it star features is a character creation system that incorporates three ‘souls’ or classes varying on a basic theme of fighter, mage, cleric, rogue. With 8 souls to pick from and various levels to establish points to enter, this allows you to create custom classes to your heart’s content. There is a metric ton of solo questing, and the public questing/raids that engulf entire areas are a completely separate adrenaline driver.

3. Star Trek Online. The oldest game on the list, but with its unique ship and ground game in one system(SWTOR’s rail shooter in space was hardly worth mentioning…) and deep IP backgrounds, it could be a perfect sleeper hit to your PC fun! First you level up your captain, in one of three faction(Federation, Klingons, Romulans) and then join one of the two alliances(Federation or Klingons) engaged in space dominance. The Missions take place in the form of episodes, with a linked theme between a series of missions. The Item mall here can sell you more than just experience boosts, you can purchase rare ships to pilot from the multiple TV series or movies! Guilds take the form of fleets and cooperatively build star bases and other projects together.

4. Neverwinter. Neverwinter is the second cryptic game recommended here and the reason is it is a fast brawler of a game. Beautiful graphics abound in this recently released title, and the action literally only stops when you do. Its only current flaw is a lack of choice in the character class selection. PvPin the game is very scissors-rock-paper, so the lack of class won’t be to bothersome for long. Also plans are to release several new character classes very soon. Public questing is competitive and fast paced. And did i mention that the setting is in D & D’s ever popular Forgotten Realms setting? There is a very crating -newbie-friendly system in place in order to welcome anyone into trying it. And pet-ranching system that levels up various companions with you while you quest. And you can ride all sorts of mounts from spiders to warhorses to even the dreaded Nightmares.

I Hope you enjoy some of these games for the first time or revisit them, now that I have mentioned them again! Feel free to leave comments on these or other FTP games that you have enjoyed!