The Last Unicorn screening tour comes to Southern California — for ONE WEEK ONLY.

This last-minute news comes to us from our friends Peter S. Beagle and Connor Cochran, whose promotion efforts for this week’s screenings were delayed by work on some other great things on the table for The Last Unicorn.

Word is only just starting to get out, and we still have lots of available seats. Especially for our special red carpet screening, this Wednesday evening, at the Regency Lido Theatre in Newport Beach. The Lido is a classic ’30s-style movie palace that has been exquisitely restored, and there’s probably not a more wonderful place on the planet to see The Last Unicorn in all its proper widescreen glory. But it also has 600 seats (!) so as of this minute there are still plenty of tickets available. Same for the Thursday night show in Murrieta, out in Riverside County, and the Saturday and Sunday afternoon shows in San Diego.

So, all you wonderful fans of Peter S. Beagle and The Last Unicorn, here is what Peter needs every one of you to do:

1) If you can get to any of these four shows, buy a ticket and come!

2) If you don’t live within reach of any of these shows, but you know someone who loves The Last Unicorn that does, then please tell them we’re coming! Call them, email then, text them, Facebook them, send smoke signals…it doesn’t matter. Just let them know where Peter and the screenings are going to be, and get them to either come to a show or else spread the word even further themselves.

This is important. It could be as much as a year before the tour comes back to Southern California, so this week’s shows are going to be the only ones in the southland for quite some time. If you live there you won’t want to miss out, and if you don’t live there, but have friends who do, then you won’t want them to miss out either.

To encourage folks to spread the word, there are also PRIZES!

Prize, Part One: Anybody who comes up to Peter’s signing table this week in Newport Beach, Murrieta, or San Diego, and says “The RAVEN sent me,” will get a free 35mm film frame from an actual 1982 theatrical print of The Last Unicorn, in a protective glassine envelope signed by Peter.

Prize, Part Two: These self-identified winners will then be asked who told them about the screening…and that person will get a film frame prize as well, even if they aren’t there! (We’ll mail them out next week, after we get home.)

Wednesday 8/21, 7:30 PM at the Regency Lido Theatre in Newport Beach

Be sure to keep your eye on the Tour Website: www.lastunicorntour.com, to see when screenings will reach your area. September 2013 screenings will be held on the East Coast, from New York to Virginia. 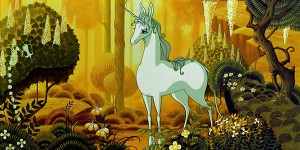 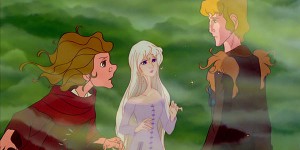 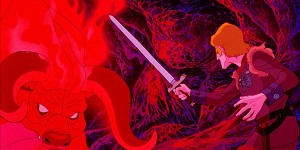 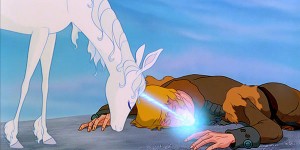