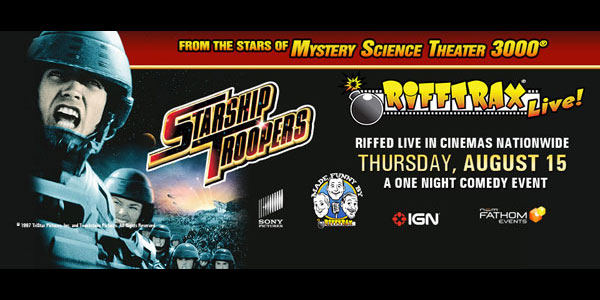 The next chapter in the “RiffTrax Live” cinema series will be Starship Troopers!

Thanks to a hugely successful Kickstarter campaign that raised enough to license a major Hollywood title, RiffTrax will be taking on Starship Troopers! For one night only, you’ll get to see Michael J. Nelson, Kevin Murphy and Bill Corbett give you their take on this scifi cult classic, in theaters around the country on August 15th — LIVE!

“RiffTrax Live: Starship Troopers” will air on Thursday, August 15, at 8pm ET / 7pm CT / 7pm MT (delay) / 8pm PT (delay), and thanks to the collaboration of RiffTrax, IGN and NCM Fathom Events, fans will be able to watch the riffing live in over 600 select theaters nationwide through NCM’s exclusive Digital Broadcast Network, and tickets are available at local box offices and through FathomEvents.com, where you can also find a list of participating theaters.

“It is all thanks to our fans generously backing our Kickstarter that we get to face down what is truly a dream title for us. This will be a real RiffTrax-palooza,” said Michael J. Nelson, RiffTrax creator and former host of the Emmy-nominated, Peabody Award-winning “Mystery Science Theater 3000.”