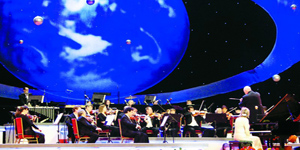 One of the biggest highlights to any film is the music playing behind the scene, in fact, sometime the music itself is the scene. Most directors would agree that without a complementing score in the background many of the great films would have fallen flat on their faces.

Can anyone imagine the beach running scene in Chariots of Fire without that impressive score from Vangelis? Without it the scene is just a bunch of young guys running along the breaking waves of the ocean.

As thrilling as Peter Jackson’s Lord of the Rings trilogy or his most recent Hobbit entry, without the powerful musical score most of those exciting and breathtaking scenes would have been two-dimensional. The same could be said of nearly every science fiction, fantasy, horror, action and dramatic movie ever made. Without the proper musical score they barely escape the screen. In some cases the music itself becomes another vital character in the film. Could you ever imaging the flamboyant James Bond without the accompanying and rousing John Barry score? That music is the second lead of the film right after Bond himself.

To examine the phenomena of big screen music as an integral part of all movies BBC 4 and BBC radio’s Helen Boaden, director of BBC Radio, are offering up a three-part documentary along with writer/composer Neil Brand called Sound of Cinema: The Music That Made the Movies. They will examine everything from Vangelis’ Chariots of Fire, the 60’s back-beat of Scorsese’s Mean Streets, and the breathtaking 1933 King Kong score from the legendary Max Steiner. Films by directors Ron Howard (Cocoon, Apollo 13), the collaboration of James Horner and James Cameron (Titanic, Avatar), George Fenton’s beautiful scoring for Gandhi , Groundhog Day and Interview with a Vampire and several other famed movie soundtrack composers.

Joining Boaden at BBC Radio will be Tom Service on Radio 3, Mark Kermode, Jarvis Cocker, Huey Morgan, actor Cillian Murphy and composer David Arnold on Radio 2. Each of these shows will focus on different aspects of music contribution to film.

Look and listen for these programs celebrating music in film beginning and running throughout the 2013 autumn months on BBC 4, BBC Radio 1, 2 and 3, 1Xtra and the BBC Asian Network.

For those on this side of the pond with shortwave radio can enjoy all the festivities listed for the audio broadcasting of the events. Fear not though because if this series is as good as advertised BBC America will no doubt pick up the video edition and play it for the North American audience sometime in the future.