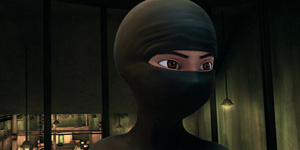 Meet a new superhero, actually, heroine from the mythological Pakistani town of Halwapur named the Burka Avenger. In this fantasy animated series the Burka Avenger battles all-too seemingly real enemies too many women and children are familiar with in that part of the world.

The Burka Avenger is the cover for a normally shy and quiet Pakistani school teacher during her day job but after classes are over is a crime fighting, justice seeking, martial arts avenger out to protect women, girls and all children from thugs and militants similar to the Taliban who desire to destroy what small inroads freedom has made in the educating and liberty for females in Islamic Pakistan and Afghanistan.

The show’s creator is popular Pakistani-British singer/songwriter and producer, Aaron Haroon Rashid, a big supporter of opening up educational opportunities to all girls and women throughout his homeland in hopes of seeing such freedoms extended throughout the Islamic world.

The biggest non-Islamic critics of the show voice concern over the use of the burqa as the heroine’s super-costume. While some have stated that use of such dress still smacks of oppression against women and wouldn’t be something this heroine would wear, others counter that it is exactly the kind of protest outfit the Avenger would wear. It sufficiently hides her true identity while at the same time makes a powerful revolutionary statement about the oppression of women under extremist and militant Islam.

Taking a clue from the master of veiled message programming Gene Roddenberry, Rashid told the AP in a recent interview “Each one of our episodes is centered around a moral, which sends out strong social messages to kids. But it is cloaked in pure entertainment, laughter, action and adventure.”

As far as the burqa is concerned Rashid told critics, “It is not a sign of oppression. She is using the burqa to hide her identity like other superheroes. Since she is a woman, we could have dressed her up like Catwoman or Wonder Woman, but that probably wouldn’t have worked in Pakistan.”

As someone who lived a few years in Pakistan this writer fully agrees with Rashid. Had he not made her costume a burka the show would have never gotten off the ground in that part of the world and the important messages found in each episode would forever be lost on the viewers.

Each week viewers learn more about their heroine, her background, real name and get to see her without her burqa. They will get to meet those most influential in her life, like her adopted karate master father, her brothers, best friends and even her pet goat. They will also come face to face with the main antagonist, a very corrupt politician and all-around sleazy bad guy named Vadero Pajero.

To check out more about this exciting new Pakistani program which will be seen on Geo TV this August 2013 go to Burka Avenger.com