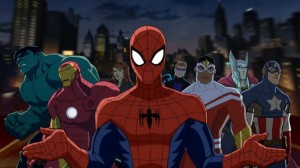 Disney XD has given the go-ahead for a third season on the animated Ultimate Spider-Man.

Season three will see Spidey joining forces with Iron Man, Captain America, Thor and Hulk to become a member of the Avengers, according to the Hollywood Reporter.  The series will see Spidey still working as a part of S.H.I.E.L.D. and teaming up with his four contemporaries to battle a host of Marvel villains.

“Marvel’s Ultimate Spider-Man has struck a chord with our audience, boys and girls alike, who are transported weekly to another world where they dare to be heroes. We are excited to deliver another season of Spidey’s thrilling feats and more of the Marvel Universe to fans everywhere,” says producer David Levine.