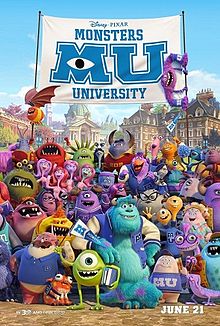 They say you can’t go home again. That may be true, but you can certainly go back to school again, or at least, go back to see the University days where the likes of Randall Boggs, Mike Wazowski, and even James P. Sullivan were introduced to each other. Yes, welcome to Monsters University!

Going into this film I had some initial trepidation. While it is true that Pixar has yet to completely disappoint me with an entirely lackluster movie, I did have some doubts with this film. What made the 2001 movie, Monster’s Inc., so incredible was not just the brilliant voice casting of Billy Crystal and John Goodman. Much of what made that movie so wonderful and heartfelt was this new world that was introduced to the movie going audience. We were shown a world where odorant was sold to help give you that garbage or wet dog smell, where Harry Hausen (a nice homage to stop-motion wizard Ray Harryhausen) is the most popular place to eat, where human children are toxic and their screams provide the necessary energy to power this monstrous world. Every scene gave the viewer something new to savor and humorously enjoy, all the while being taken on a comic ride in this new take of the classic “buddy movie.” This was the source of my trepidation. Would there be more stories to tell, and can it be presented in a world that not only makes the story believable, but also surprise me? Can the geniuses at Pixar make lightning strike twice?

From the start we are introduced to a very young Mike Wazowski, and at the same time young Mike is introduced to the wild world of scaring and what it takes to be a scarer. From that moment his fate is determined and it is clear that our young, one-eyed green ball friend can only end up at one place, Monsters University. This is the university that has the best school for creating scarers. Almost immediately we meet the very amiable Randall Boggs, a lizard with an uncontrollable talent for camouflage, and the oversized, lazy James P. Sullivan, who irritatingly doesn’t do any work at all and merely coasts along riding on the legacy of his father. The role reversals were of a complete surprise when it came to Sully and Randall. As much as Randall was the scheming villain of Monster’s Inc., Sully is as equally annoying here, and when circumstances force him to be competitive with Mike, you can’t help but root for the little guy. We are Mike. He shows how an underdog goes into a challenging situation, and through reason and hard work, does what it takes to come out on top.

Along the way we get to know a variety of other monsters, some of whom are so kind and gentle, that if they were to have shown up in my childhood bedroom in the middle of the night, I probably would have taken them to the kitchen to share some cookies with and then ask my parents the next morning if I could keep them. Having some of them voiced by the likes of Sean Hayes and Dave Foley certainly added to the same warm charm that they were animated with. Lastly, we are introduced to the head of the School of Scaring, Dean Hardscrabble, brilliantly voiced by the endlessly talented Helen Mirren. Mirren’s vocal performance gives to life this bizarre monster that looks like a cross between a 10 foot tall dragon and a millipede. She shows us that acting doesn’t have to be in front of a camera, that a good actor/actress can also give a strong, convincing performance in any setting, even one in a recording studio behind a microphone.

The storyline here is filled with surprises. Just when I thought I had the rest of the movie mapped out, the writers (Robert L. Baird, Daniel Gerson, and Dan Scanlon) would continually pull new rabbits out of their collective sleeves and take me on a new adventure, and when I thought they were out of surprises, they would prove me wrong by not only delivering another one, but a bigger one filled with an even more incredible twist. After a time, the film appropriately slows down just enough to let us off of the ride by depositing us in a very familiar place that resembles much of the earlier days at Monsters Inc.

I must also make mention of the university world presented to us in this movie. This is largely where the geniuses at Pixar are able to work their magic. As unusual as the monster element may be, the world of “higher education” is beautifully, if not accurately, depicted here. We see what the first days of the school term are like, as well as the different fraternities, the clubs and organizations, even the wild activities of a frat party. It is so well animated and told that anyone who ever attended a major university would have to say, “Yep, that’s exactly how it is!”

So yes, Pixar did indeed make lightning strike twice, only this time, instead of trying to mimic all the elements that made Monsters Inc. a huge success, they gave us something that was different. It was equally as good, but different. And while it may not have been as funny as the 2001 film, it was without a doubt, just as much fun.