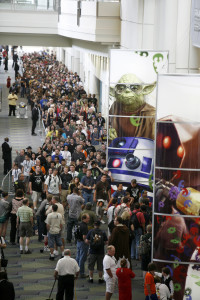 Kathleen Kennedy, the President of Lucasfilm and producer of Star Wars Episode VII, will make her inaugural Star Wars Celebration appearance in Essen this July. Kennedy will make an appearance on the main Celebration stage talking with celebrity host Warwick Davis about her amazing career in the movie industry and her recent move to Lucasfilm.

“When I joined Lucasfilm, I immediately saw the true passion shared by Star Wars fans around the world. I’m thrilled to attend my first Star Wars Celebration and see in person that energy that makes the Star Wars experience so special.”

Nominated for eight Academy Awards®, Kathleen Kennedy is one of the most successful and respected producers and executives in the film industry today. She joined Lucasfilm in 2012, personally selected by George Lucas to lead the company. As a testament to her standing in the film community, she is currently Vice President of the Academy of Motion Pictures Arts and Sciences (AMPAS), as well as sitting on their Board of Governors.

Kennedy has produced or executive produced over 60 films, which have collectively garnered 120 Academy Award nominations and 25 wins. Among her credits are four of the highest-grossing films in motion picture history: Jurassic Park, E.T. The Extra Terrestrial, Indiana Jones and the Kingdom of the Crystal Skull, and The Sixth Sense, as well as such blockbuster entertainment as the Back to the Future trilogy, Who Framed Roger Rabbit, Gremlins, The Goonies, Poltergeist, War of the Worlds, Twister and A.I. Artificial Intelligence.

Her diverse filmography also includes acclaimed dramas like Lincoln, War Horse, The Curious Case of Benjamin Button, The Diving Bell and the Butterfly, Munich, Seabiscuit, Schindler’s List and The Color Purple, and animated motion pictures like The Adventures of Tintin, Persepolis, An American Tail and The Land Before Time.

Prior to joining Lucasfilm, Kennedy headed The Kennedy/Marshall Company, which she founded in 1992 with director/producer Frank Marshall, and in 1982 she co-founded the phenomenally successful Amblin Entertainment with Marshall and Steven Spielberg.

What is Star Wars Celebration
Star Wars Celebration is a weekend fan festival that brings fans and families together, from all points of the globe, to celebrate the pop-culture phenomenon that is Star Wars. From its young fans of Star Wars: The Clone Wars to die-hards fueled by the nostalgia for the original Star Wars trilogy; curious, casual followers; gamers, readers, costumers or collectors — there’s something for everyone at festival. This July, Star Wars Celebration will come to Essen Germany and promises to deliver a landmark experience where memories are made, families brought together, old friends reunited and new friendships formed – all in the setting of the ever-evolving Star Wars universe.