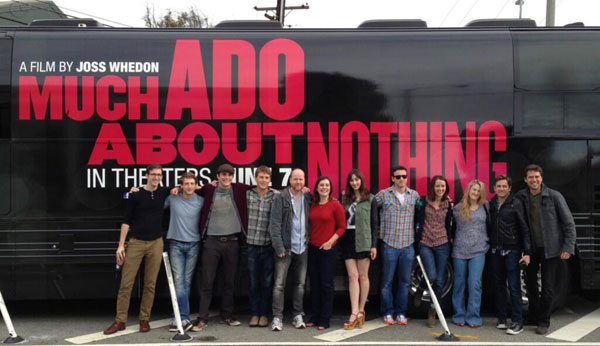 First, the good parts. Sean Maher is great as Don John — his agent should get him more villain roles, and those quickly. He was da bomb. Amy Acker is good and believable as Beatrice. Joss has a fantastic home and huge estate. So we know where the Avengers money’s gone, and well spent money it is. Everyone seems to be having a marvelous time, and it’s nice of them to share that with the rest of us.

The middling parts. Nathan Fillion is fine, but, despite having third billing, was in the movie very little. Clark Gregg, who plays Agent Phil in the Marvel movies series, is in the movie, so if you can’t wait for S.H.I.E.L.D. the TV show, you can get a Phil fix here.

Alexis Denisof is sorely miscast as Benedick. If he’s actually English, then he should have stuck with his natural accent, because his American accent is awful. If he’s actually American, his English accent is better than his real voice. Whatever on screen chemistry he had with Acker in Angel is long gone, which is too bad. But what’s much worse than his American accent or his lack of chemistry with his leading lady is his comedic timing. He’s not funny, even with funny lines. He does do some great physical comedy in what, in Branagh’s version, is the most hilarious scene of a very funny movie, and Denisof is indeed funny. In fact, in any scene requiring physical comedy he was hilarious. But once he speaks, he blows the lines, and no one, especially not his director, seemed to feel it necessary to correct him. It seems like the movie was made with one take per scene. I realize they did this in less than two weeks, but the idea is to make something awesome in that time, not something that feels like it was, well, made in less than two weeks.

The rest of the cast feels oddly out of place, as if most of them should have had different parts. Hero and Claudio, in particular, are not engaging enough to be the male and female ingénues, and both essentially fade off the screen whenever another actor is in the shot. I’m not Robert Sean Leonard’s biggest fan, but he was far more believable as Claudio than Fran Kranz playing the same role in this movie.

I didn’t mind the film being in black and white at all, but having the movie set in present day while using Shakespeare’s language does two things — it emphasizes the beauty and wit of said language while at the same time making clear how very outdated the language is. If the rest of the movie had been great I might not have minded. In this case, it just made me feel like everyone was lazy, that no one felt like putting forth the effort to translate the Bard into modern language any more than they felt like doing more than one take.

I realize that comparing this movie to Branagh’s masterful version of this story is, perhaps, unfair. But you can’t make a Shakespeare film without the expectation of comparisons to former versions. And, despite a cast full of actors I enjoy and a director whose work I love, this one just didn’t do it for me.

If you want to feel like you’re spending time with some fun Hollywood folks while they play around and have some hijinks with the Bard, then you’ll probably enjoy this movie. Most of the audience with me seemed to love it, and if you’re able to go just to hang out with Joss’ Gang, then you’ll have a good time. As for me, Ken Branagh remains the King of the Bard and all others are merely the pretenders to his throne.