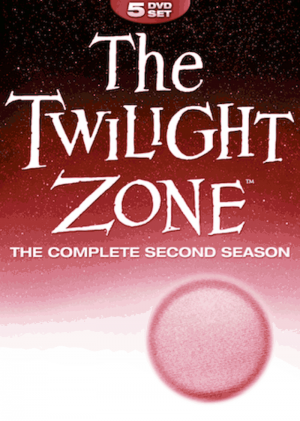 Earlier this week, The Twilight Zone was named one of the top five best written TV series of all time.

Dipping back into this television classic via the just released The Twilight  Zone: The Complete Second Season, it’s easy to see why.   Close to sixty years later, Rod Serling’s brainchild is still as compelling, fascinating and entertaining as ever.

The new DVD set includes all 29 episodes from the second season.   Not only do you get the “Eye of the Beholder,” the classic segment told through the eyes of a woman who just had plastic surgery, but you also get the debut of William Shatner in the series.  And while it’s not quite as famous as “Nightmare at 20,000 Feet,” I’d argue that “Nick of Time” is just as good if not better.  In addition, you get a wealth of other episodes –some familiar, others not as much – including King Nine Will Not Return, The Man in the Bottle, Nervous Man in a Four-Dollar Room, A Thing About Machines, The Howling Man, Eye of the Beholder, Nick of Time, The Lateness of the Hour, The Trouble with Templeton, A Most Unusual Camera, The Night of the Meek, Dust, Back There, The Whole Truth, The Invaders, A Penny for Your Thoughts, Twenty-Two, The Odyssey of Flight 33, Mr. Dingle, the Strong, Static, The Prime Mover, Long Distance Call, A Hundred Yards over the Rim, The Rip Van Winkle Caper, The Silence, Shadow Play, The Mind and the Matter, Will the Real Martian Please Stand Up? and The Obsolete Man.

What sets this release of the second season of The Twilight Zone apart from other releases is this set includes only the 29 installments for season two and the set is more affordable priced than other sets have been.   Of course, you don’t get any extras.  But if you’re a fan who just wants to relive certain installments or a new fan looking to discover why the series is so well regarded, this set is an affordable way to binge.

The series looks and sounds great on DVD.   The other selling point to the set is that the episodes are uncut.  Given the longer running time of many shows of this era, most syndicated repeats include some edits and snips.

Like all seasons of the series, the second seasons has its hits and a few that don’t quite work.  But overall the hits more than outweigh the misfires.

If you love the show and want an affordable way to own the second season, this set is highly recommended.   Watching it again, I fully understand why it was voted one of the best written shows of all time.  And you will too.