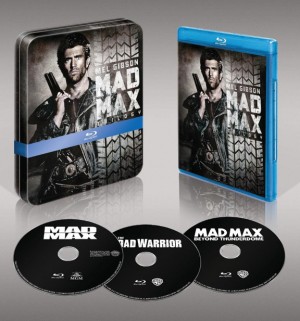 The Mad Max series is one of the most successful franchise in cinema history.  George Miller’s post-apocalyptic vision of the future is among one of the most influential in history and the series put Mel Gibson on the map.

So you’d think that a series with that much going for it would get a better Blu-Ray release.

It’s not that the movies don’t look and sound great. But instead of the special edition of Road Warrior that was released a couple of years ago, we get a stripped down, single disc edition.   The other two installments are also conspicuously lacking in extras.

The main selling point of this set is that it’s the first time the complete trilogy has been released on Blu-Ray.

It’s just disappointing that Warner Brothers, who generally makes its box sets worth the double dip, has dropped the ball on this set.

The set does feature the Blu-Ray debut of Mad Max Beyond Thunderdome.   But if you’ve got the other two already, the good news is you can pick it up separately.  (It may just take up a bit more room your shelf).

It might be better for fans to wait and pick up that set then.  But if you can’t wait to have all three films on Blu-Ray and you only care about the movies, this isn’t a bad set.  The third installment is what it is and it hasn’t necessarily improved.  But the first two are worth the price of admission.  They will remind you of why these films are so successful and why Mel Gibson was such an action star.