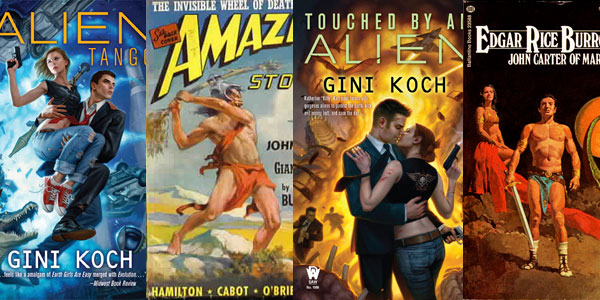 At the start of the movie, Galaxy Quest, the main actors are bickering before they go onstage at a con. Alan Rickman’s character, Alexander Dane, is bemoaning how he’s reduced from Shakespeare to one stupid line of dialog. Sigourney Weaver’s character, Gwen DiMarco, replies thusly. “At least you had a part, Alex. You had a character people loved. MY TV Guide interview was six paragraphs about my BOOBS and how they fit into my suit!”

Welcome to this month’s installment of Galaxy Quest, or “How We’re Trying So Hard to Pretend it’s 1953 Over in Science Fiction Land.”

As you may or may not know, the Science Fiction Writers’ Association (SFWA) is embroiled in some “fun” related to both the 200th cover of the organization’s official quarterly magazine, The Bulletin, and the article within it written by Mike Resnick and Barry N. Malzberg (in what I call their Two Old Guys Kvetching About Things That Happened Before Half the World Was Born column) being considered condescending, at best, and flat out misogynist, at worst and in reality, about women in the Science Fiction and Fantasy genre. Excuse me, “ladies”. With lady parts fitting nicely into their bathing suits. Yes, they went there. In an industry magazine.

A lot of authors have spoken out about this, and fellow DAW author Jim Hines has put up a comprehensive list of such, in addition to his own rebuttal in the next issue of The Bulletin, wherein Resnick and Malzberg go on to accuse those who didn’t like be told to act like Barbie dolls of being censoring Nazis. (Yes, they went there, both theres.)

And yet, I was going to sit this one out. Not because I’m not enraged by this (trust me, I am), but because I’ve been on the planet for something-something decades and I’m not shocked by it. At all. And I’m on deadline, and my books say what I think on this subject potentially more eloquently than I would.

However, that was before Slice of SciFi’s executive producer discovered that my books and name were being tossed about in, as she brilliantly put it, the Boys Versus Girls SciFi Food Fight. Clearly, I needed to take more of an interest.

The Huffington Post is pro women getting to write whatever the hell they want, and Stuart Sharp appears to be quite anti, despite his explanation that he didn’t really mean it, he just meant a lot of it. The gist I took away from Sharp’s explanation is that he fears that women just can’t have possibly read classic SF and so will be at a disadvantage and probably muck it all up. (The poor dears.) (Okay, that’s my editorial addition.)

So, I guess it’s time for me to defend who the hell I am and why the hell I have as much of a right to write whatever the hell I want as someone with a full set of tackle, including but not limited to Stuart Sharp, whose tackle I can neither confirm nor deny as being fully there or intact.

This, however, is the second version of this article. I originally wrote about my life and the various barriers I’ve broken. About the few books and comics that gave me strong females to relate to, and how more of them arrived over the years. About how I’ve read all the hard SF and could write it if I actually wanted to. I wrote about how disappointed I was to be asked the Galaxy Quest Boobs Question at San Diego Comic-Con last year; asked by a man who professes to know better, too. And all of that was interesting. And long. But then, if you’ve read any of my novels, you know I can do long without breaking a sweat.

But ultimately, I realized that while it’s once again time to make a stand, I don’t actually have to defend anything.

The mere fact that these men are making women around the globe feel that we have to defend our right to write in whatever genres we want is the real crime. And it’s both ironic and insulting.

Actual masters of science fiction fought long and hard to be considered something other than trashy pulp writers (and, in fact, that argument still rages), and now some dudes clinging to outdated notions of what’s right and proper, all of whom should have learned better long before now, are turning around and dishing out the same treatment — denigrating anyone who isn’t in their perceived club, including authors who dare to have fresh voices, or take the old tropes in different directions. Oh, but only if they’re women. GUYS doing this is just fine and proper. Did I say they made us defensive? They have. But what they’ve really made us is angry.

But you know what the best revenge is? In this case, it’s getting the readers. I have as many male fans as I have female fans. I have rocket scientists who are fans, military of both sexes and all branches, homemakers, teachers, business owners, and more. My fans, unlike these male authors, have no problem with a woman writing science fiction, nor do they have an issue with strong female characters. Or strong gay characters, strong characters of color, or hot sapiosexual aliens (but I digress). Nor, I must add, do they have an issue with romance, action, or humor being in science fiction. Readers, it seems, just want to read good books, they will be the judges of what they each, individually, feel is a good book, and they don’t really mind if an author mixes in more than one ingredient or genre.

Perhaps what’s upsetting these men is the fact that it appears women seem to be better at writing science fiction the majority of readers want right now, which is, most likely, the real cause of all the misogynist brouhaha — girl cooties be entering the realm and stealing the readers! And, no one could read both soft and hard science fiction, let alone other genres, don’tchaknow. So these men bluster and accuse the men and women who point out that they’re being dismissive, rude, misogynist, and stupid of being the bad guys. Okay, I get it — as Elton John said, sorry seems to be the hardest word.

I’d be remiss if I didn’t point out that there are, of course, men out there who aren’t afraid of women entering their field. Authors like the wonderful Eric Flint, Jim Hines, Joshua Palmatier, Nathan Long, Jeff Marriotte, Weston Ochse, and more besides — authors who support women with more than platitudes, and who write female characters that are fully three dimensional.

By the way, my wonderful publisher, DAW Books (owned and operated by two amazing and exceptional women), doesn’t publish romance — they publish science fiction, fantasy, and horror. That many consider that I write science fiction romance is considered a plus by DAW and myself both, not a minus, but still and all, I’m a science fiction author, whether I have permission to be so from the old men who want to cling to outdated notions and hide behind bullshit rhetoric or not.

It’s time to, once again, make a stand. To stand up against the Antiquated Boy’s Club and share that it’s six decades past 1953. To remind them that they pissed us the hell off in the 1970’s and there are a lot more of us now that it’s 2013. To state, plainly, that women don’t need any man’s permission to write whatever we choose, however we choose to write it.

And, on a personal note, the next man who asks me the Galaxy Quest Boobs Question had better be wearing an iron cup or be able to run exceptionally fast. Because I’m now once again mad as hell and, like so many of my fellow authors out there, I’m not going to take it any more.