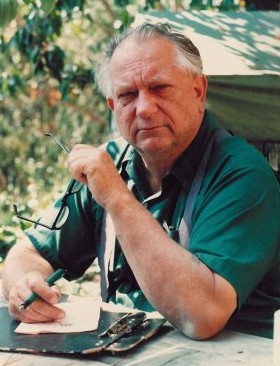 Science-fiction writer Jack Vance has passed away at the age of 96.

Jack Vance, whose legal name was John Holbrook, published most of his work as Jack Vance, but he also wrote 11 mysteries as John Holbrook Vance and three as Ellery Queen, as well as books under the pen names of Alan Wade, Peter Held, John van See and Jay Kavanse, according to the Jack Vance website, which is maintained by family and friends.

“This is a complex guy, and (there’s) an awful lot to say about him,” John Vance told The AP.

In 2009, a profile in the New York Times Magazine described Vance as “one of American literature’s most distinctive and undervalued voices,” according to the website.

Born in San Francisco, Vance graduated from the University of California, Berkeley, in 1942. He worked for a while as an electrician in the naval shipyards at Pearl Harbor, leaving about a month before the Japanese attack there, according to the website.

Although legally blind since the 1980s, Vance continued to write with the aid of software, including his most recent novel, “Lurulu,” his son said. Vance had said “Lurulu” would be his final book, but he completed his memoir, which was published in July 2009.

In his later years, Vance suffered from poor kidney health and diabetes, which he which he maintained by diet control, his son said.