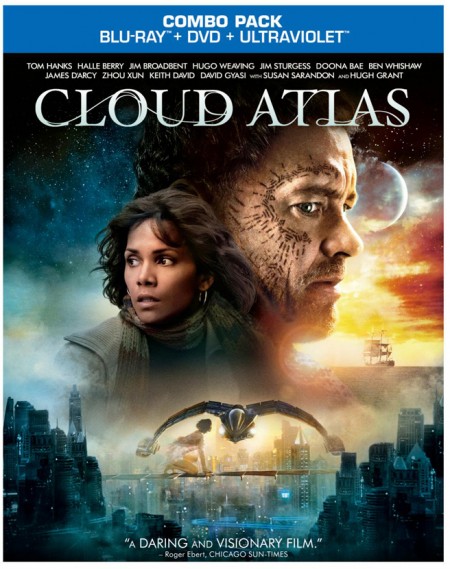 The Wachowskis siblings have given movie goers some of the most audacious movies of the past couple of years like The Matrix and Speed Racer. With their latest film (co-directed and co-written by Tom Tykwer) Cloud Atlas, the movie makers may have bitten off more than audiences were willing to chew at the theater. But now that the film is hitting Blu-Ray and DVD, I have a feeling that Cloud Atlas will find a new, passionate audience.

Adapted from the novel by David Mitchell, Atlas is six interconnected stories told across several centuries. With an impressive cast that includes Oscar winners Tom Hanks and Halle Berry, the film is a technical marvel with some solid performances. The big issue is that some of the interconnected stories are more compelling than others, leading to some segments where the film completely enthralls you and others where you keep wondering if you maybe you should skip ahead to the next chapter on the disc.

The Blu-Ray, which hits shelves on May 14, looks and sounds great. With a three-hour running time, the film could have suffered from compression issues, but there are few to be seen. There’s an hour’s worth of extras on the making of the film that are fairly interesting and worth your time if you enjoyed the film. If you’re not a fan, I can’t say you’ll get much here that will suddenly turn you around on the film.

Cloud Atlas is a polarizing type of film. Parts of it are great, others not so much. But give the writers and directors credit for trying something a little different and something that requires a bit more audience investment than your standard big-budget Hollywood thriller. For that reason alone, you should check out the film and see which camp you land in.