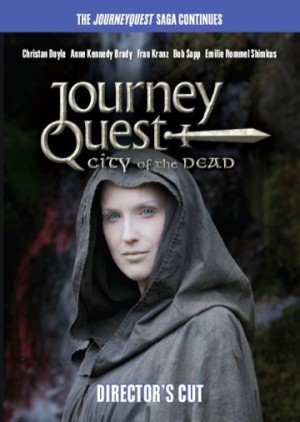 I recently had the pleasure of being introduced to the great work of the folks at Zombie Orpheus Entertainment with a review copy of the DVD release of season 2 of their hilarious webseries JourneyQuest. Entitled “City of the Dead” season 2 continues the story of the unfortunate wizard Perf and his band of companions as they continue on their rather ill fated quest.

First off I have to say that JourneyQuest is great, one of the best fantasy web series I’ve seen! I wasn’t familiar with the series but “City of the Dead” was so enjoyable I had to go back and watch season one. They take the normal genre tropes and turn them inside out, from the “heroic” knight supposedly leading the quest to the somewhat bumbling Perf things aren’t what you would expect.

As the show progresses you never know just what you are going to find around the next corner. With the bard Wren and a group of vengeful Orks trailing after the party, throw in an elven assassin and things are never dull for the group.

Full of humor and great storytelling, backed up with terrific performances JourneyQuest: City of the Dead is definitely worth watching. The DVD is full of what you would expect in a DVD, behind the scenes clips and interviews as well as a surprising number of commentary tracks. I’ve only listened to one so far but it was worth the time.

You can check out JourneyQuest: City of the Dead at http://www.journeyquestmovie.com/ as well as http://www.youtube.com/zombieorpheusent.