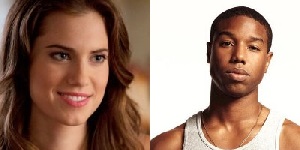 As production gears up for the Fantastic Four reboot, we’re hearing rumors about a couple of actors who could take over the iconic roles.

According to the Hollywood Reporter, actress Allison Williams is on the short list to play Sue Storm, aka the Invisible Girl.  Williams is best known for her work on the HBO series Girls and is reportedly one of several actresses in conversations for the role.

In addition, we can report that Chronicle actor Michael B. Jordan is in talks to join the movie as Johnny Storm aka the Human Torch.

Jordan has been on TV in The Wire and Friday Night Lights and he worked with the Fantastic Four reboot director Josh Trank on Chronicle.

So, do you think these two are good choices for the roles?