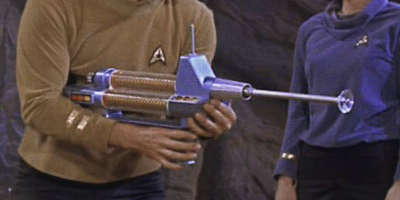 The one-of-a-kind prop used by Captain Kirk in Star Trek‘s second pilot, “Where No Man Has Gone Before,” was sold at auction Saturday. This piece of sci-fi history sold for the sum of $231,000, well breaking the auction house’s estimate of $50-$70k. It is now the second most expensive auctioned classic “Trek” item, after the $304,750 shelled out in 2008 for the captains chair.

The wood and aluminum prop weapon was used by Shatner in the pilot episode before being returned to its designer, the toy designer Reuben Klamer. Klamer created the rifle at Gene Roddenberry’s request in exchange for licensing rights to produce toys based on the design. The design came about when NBC requested the show be “retooled for a more action-packed adventure” and Roddenberry requested “a really big gun.” While only used in the single episode it was used in publicity photos and appeared on a lunch box.

Also sold at the auction yesterday were Munchkins flower plot from “The Wizard of Oz” ($15k) and a flying suit worn by Christopher Reeve in “Superman IV” ($25k).

Would you part with this much to grab a rare item like this?