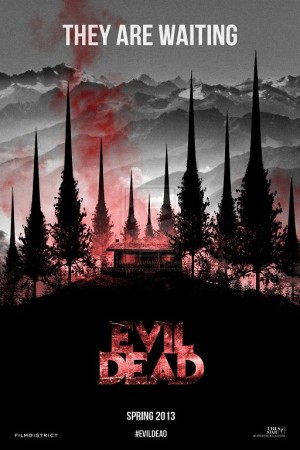 If you’re planning to see the Evil Dead reboot, take my advice and don’t spring for the extra large tub of popcorn and extra large soda.  Odds are you won’t get to finish either one.  One is that the movie clocks in at a mere ninety minutes and the other is that by the time you get to the equivalent of the second reel, odds are you may not feel much like eating any more.

In the interest of fairness, I should point out that I’ve never seen the original Sam Raimi directed version of The Evil Dead, though I’ve had the horror-comedy recommended to me multiple times over the years. So, if you’re coming to this review hoping I can tell you if and how the new version has improved on and/or destroyed the original, I can’t necessarily tell you that.

What I can tell you is that for a horror-comedy reboot, this one is decidedly lacking in humor.

It all starts with an innocent trip to the family cabin in the woods where a group of friends hope to save Mia from her drug addiction by isolating her and having her go through detox.  Among the friends are a nurse, Olivia, the family friend Eric, Mia’s brother, David and his girlfriend, Natalie.  David is distanced from Mia, Eric and Olivia because he escaped to Chicago and avoided them all as his mother died in a mental hospital.

As Mia goes through detox, she begins to notice a rancid smell in the cabin, leading to the discovery of a bunch of animal corpses in the basement and the Book of the Dead.  Eric unwittingly translates some of the book and summons up a demon that needs the death of five people in order to rise up. Trapped in the cabin by a heavy rainstorm swelling the local stream, Mia’s possessed by a demon and the other four friends are dying in various creepy and horrifying ways on screen.

This, of course, includes buckets and buckets of blood as well as a variety of horrifying ways for each victim to succumb to death.   As I said before I haven’t seen the original, but I imagine based on the reaction in the theater that many of the fates met by our characters are homage to the original version.

A lot of my issues with the film is that it feels like it’s relying too much on knowledge of the previous incarnation in order for the new audience to fully understand or grasp what’s unfolding on screen.  Yes, finding a book in a room filled with dead animals is probably going to bring about bad things if you read from it or translate it, but the film never really makes that connection clear.  Also, a bigger issue is the characters aren’t really fleshed out enough (pun not intended) that I cared about them enough to feel anything when they rapidly start dying off in a one gruesome scene after the next.

Throughout the film, I couldn’t help but find myself thinking back to last year’s Cabin in the Woods and wishing this Evil Dead reboot had half the originality or something new to say about the horror genre that Cabin did.   I also found myself wishing that director Fede Alvarez subscribed to the less is more theory when it came to showing us the truly horrible way people were dying in the course of the film.

And while I’ve not seen the original, I am aware that a chainsaw plays a pivotal role in the film.  Fans will be happy to know the chainsaw does show up and it is an essential part of the film.

I’ll be curious to see how fans of the original version react to the new version of Evil Dead.  I suspect the film will do well based on name recognition.  But I doubt this film will be quite as fondly remembered as the Sam Raimi original is by many fans of the genre.

For me, it’s one of the most disappointing films of the year.