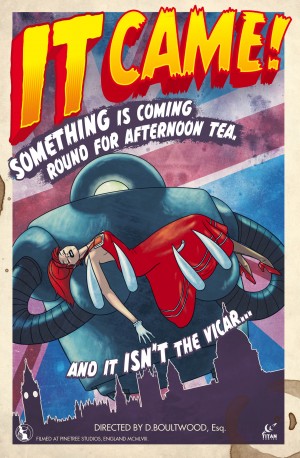 I was thrilled when Titan contacted us again with a review copy of the first issue in the 4 book series. IT CAME! #1, written and illustrated by Dan Boultwood, lives up to the press copy. From the cover through to the last page the story is enjoyable and filled with a story that just screams with the tropes of the 1950s B-scifi flick. The chauvinistic man’s man scientist, the some what ditzy but not as dumb as she seems “dame”, and don’t forget the monster.

On top of the obvious genre jokes, there are numerous other gags from the “film”‘s production at “PINETREE STUDIOS” to humorous ’50s style ads in the “intermission”.

While most of my ’50s B-movie experience is films placed in the United States, I had no problems at all with the placement of the story in rural England; home that it is of the oldest well known alien invasion story, H.G. Wells War of the Worlds. However a few of the britishisms in the tale flew over my head and while I could tell they were supposed to be funny, they were lost on me.

Boultwood’s story in IT CAME! is solid storytelling, drawing heavily on the movies of the period. The art in this issue speaks for itself and I can’t say enough about the quality of the drawings inked by Boultwood.

I can’t wait to see what happens next in issue #2.