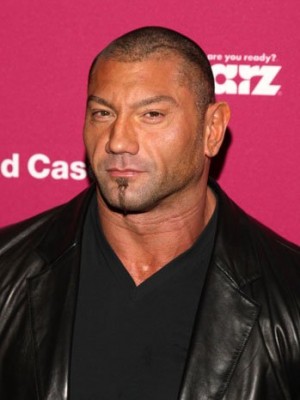 In news that is sure to make Sam Roberts squee with delight, the role of Drax the Destroyer in Marvel’s upcoming Guardians of the Galaxy will be played by mixed martial artist and WWE professional wrestler, Dave Bautista.

Bautista has been on the short list for the role of Drax alongside other actors as Isaiah Mustafa, Patrick Wade, and Jason Momoa (who was the odds on favorite early in the running).

The movie, which will be directed by James Gunn, now has two actors signed for the ambitious Marvel movie, Bautista and Chris Pratt.

The Guardians, in addition to Drax, include Groot, a giant tree man; Star-Lord (Pratt), a gun slinging half human/alien intergalactic vigilante, Gamora, who is the last of her species, saved by Thanos (who we saw in the final-scene tease of Avengers) to be his assassin but now is battling against him, and Rocket Raccoon, a genetically engineered animal with a special talent for guns and explosives. Drax is a former human, now resurrected green warrior with super powers who has one objective, and that is to kill Thanos.

Bautista has only recently started to carve his way into acting, and will next be seen with Vin Diesel in Riddick, opening Sept. 6.