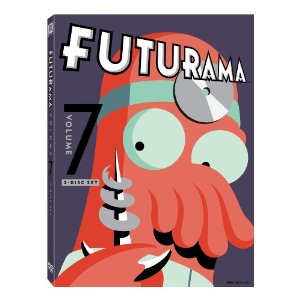 One of the pleasures of my summer viewing schedule is Comedy Central’s new episodes of Futurama.  The series, once
sent out to pasture by Fox but revived thanks to DVD sales and syndication airings, is still going strong as it enters its seventh season.

And, of course, new episodes in the summer means a new DVD/Blu-Ray release in the winter and the chance to enjoy the episodes (plus a LOT of goodies) all over again.   And to have the pleasure of clearing out a little more space on the DVD shelf for the latest addition.

The latest release, Futurama, Volume 7, includes the first 13 episodes of the new season that aired last summer on Comedy Central.   This run of episodes is among the most confident and assured the series has delivered since it returned to cable boxes three years ago.   If you’ve already seen them, this is a great chance to watch them again to watch for the jokes and gags you might have missed the first (or fourteenth) time around.  If you haven’t seen them yet, this is a great chance to catch up on one of the best animated series on TV today.

And if it were just the episodes, it would be worth price of admission. But as I’ve said many times in the past, the releases by 20th Century Fox for The Simpsons and Futurama are the gold standard in TV on DVD.  Included on each installment is a commentary by various behind the scenes people including producers Matt Groening, David X. Cohen as well as vocal talents Billy West and John DiMagio (just to name a few).  The commentaries are lively, entertaining and informative, which is exactly what I’ve come to expect from these releases.  There are also a wealth of other extras including an alternate ending for one episode, deleted scenes and an extra focusing on music creator Christopher Tyng. The extras are the icing on the cake of one of a great set.

If you’ve got a Futurama fan on your holiday list, this is the perfect gift.  Or you could just give it to yourself.   Either way, it’s a great set and the good news we’ve got at least one more to look forward to.