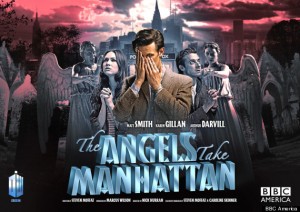 I didn’t cry when Adric died.  Nor did I cry when Rose Tyler left (the first time).  (I was honestly a bit relieved since I’d wearied of her character and the multitudes who declared her the best companion ever…)

Sarah Jane Smith’s departure, while bittersweet, didn’t get me all misty-eyed.

I will admit that as the Ponds made their departure from Doctor Who this week, not only did I have a lump in my throat, but I was also fighting back tears like I did in the first ten or so minutes of Up.

Damn you, Steven Moffat.  You got me.

A change in companion is just part of the fundamental nature of Doctor Who, I kept telling myself as I headed into “The Angels Takes Manhattan.”

And yet for some reason, the bittersweet departure of Amy Ponds and Rory Williams hit me in such a place that I was emotionally moved to see them go.  I think a large part of that is the fact that Steven Moffat wrote their ending in such a way that there’s little or no chance we’ll see them crop up again.

Moffat spent the last four episodes not only laying the foundation for this story, but putting the rug in place so he could pull it out from under us.  During this five episode run, we’ve seen the couple torn between their life of adventure with the Doctor and his need to have companions and the desire to have an ordinary, normal life together, complete with jobs, friends and the mundane responsibilities of every day life.  Last week’s superlative installment showed Amy and Rory at their most mundane–and how that lifestyle drove the Doctor crazy after just a few minutes.

And yet when the choice comes, Amy and Rory elect that life, knowing they can never see the Doctor again and likely not hear about him since he’s gone to such elaborate lengths to remove himself from the universe.

Utterly heart-breaking, tragic and exactly the way their story can and should end.  Bittersweet.

The ending is helped by the fact that we had a pretty solid story leading up to it.  Moffat brings back the Weeping Angels for what I hope is the last time.  I like his creation and I think they were effectively returned to their creepiness  from “Blink.”   But I really feel like we’ve done just about all we can do with them.  That said, the Statue of Liberty as a huge angel was effective and extremely well rendered.

The story also has some interesting implications for the rest of series seven.  River states that the Doctor doesn’t like endings.  Which should make it interesting when he eventually meets Jenna Louise Coleman’s character in the Christmas special.  If the end of her story is a fixed point because the Doctor knows how her story ends, what will he do to either try to prevent it from happening.  Or if he will bend the rules to try and save her from her eventual fate and what the impact that could have to him and his travels in the future.

Give Moffat a ton of credit–he not only gave us a great ending to one story, but he’s effectively set up a great dilemma for the series moving forward.

Effective, moving, scary and over far too soon, “The Angels Take Manhattan” is the best episode of the season so far.  And we’ve got eight more episodes for Moffat to find a way to top himself.

I can’t wait to see what’s next.