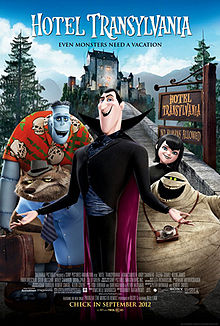 Coming out of Hotel Transylvania, my wife turned to me and said, “You’re going to give it a good review, right?”   She was then disappointed when I said, “Probably not” and she’s been after me for the last couple of days to say nice things about the movie.

I, on the other hand, wasn’t overly impressed by the film.  It had some nice isolated moments, but overall the picture feels a bit flat when compared to the work being done by Pixar and Dreamworks Animation.

Maybe I expect too much from an animated feature.  Or maybe it’s my own predisposition against Adam Sandler comedies.  Because that’s what Hotel Transylvania is at its most basic level–an animated Adam Sandler movie.

Sandler has assembled his usual cast of friends from other comedies to lend their voices to some of the great Universal monsters.  Sandler plays Drac, who years ago built a huge castle hidden from humans where he could raise his daughter, Mavis.  Approaching her 118th birthday, Mavis is eager to head out into the world and see if humans are really as bad s her father says they are (he’s got good reason to mistrust them–they killed his wife).  Using an elaborate ruse, Drac tricks Mavis into believing everything he’s told her about humans is true and she decides to live her life in seclusion and safety along with Dracula.

That is until a human stumbles across the castle during Mavis’s 118th birthday party and the two begin to fall in love.  Drac is forced to hide the human from his guests and his daughter for fear of losing his sanctuary and his daughter.

The moments when the movie centers on the relationship between Mavis and Drac are among the more enjoyable in Hotel Transylvania.   Sandler and Selena Gomez’s vocal performance coupled with the animation of director Genndy Tartakovsky make these moments work well, blending a nice humor with some heart.   You can also breath a sigh of relief when I tell you there’s not a sparkly vampire in sight.

If only the rest of the movie was as successful as these isolated moments.  Tartakovsky seems to be channeling a bit of the wackiness of the old Warner Brothers cartoons in how his monsters contort and move across the screen.  Visually, the film works well enough, but there’s just not enough of a story to go with it.   Running at just under ninety minutes, the plot feels a bit thin at points.

There is humor to be mined by the classic monsters.  We’ve seen in Abbott and Costello Meet Frankenstein and it was the central premise of the original Munsters.  Unfortunately, it’s not quite as well developed here since this is, as I said before, little more than an animated Adam Sandler movie.  Thankfully, it’s a tamer Adam Sandler movie, but there’s still the requisite number of body function jokes in the script and film.

As a premise, Hotel Translyvania had a lot of promise.  But apart from a few isolated moments, the film isn’t quite as solid as it could have been.