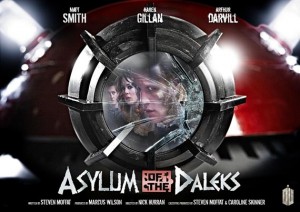 After a longer  the usual (for the new series anyway) hiatus, the Doctor is back, kicking off the lead-up to his fiftieth anniversary by facing off against his long time, lethal foes, the Daleks.

If you haven’t yet seen “Asylum of the Daleks,” I highly recommend you stop reading now.  I’m going to discuss the entire episode, including SPOILERS just as soon as I find some milk and eggs for my souffle.

As many of you know, I got a bit frustrated with the hero of the universe mentality taken on by the later stories in the RTD and David Tennant era and during much of last season’s run of Doctor Who installments.   It didn’t quite gel with the character I got used to on the classic series and so I was delighted when the series seemed to be headed back toward its roots last year with the series acknowledging this fact and trying to pull back from it.

And so it is that we enter series seven.  I’ll have to admit my expectation levels weren’t quite as high as they were last year (series five put so high that no run of episodes could have lived up to my expectations), but I will admit I was excited by all the tidbits leaked to the press and fans about “Asylum of the Daleks.”    The idea that we’d see every single Dalek seen on screen since their arrival in 1963 thrilled the fan boy deep inside me.   The big reveal of all the Daleks is the reason why HD was invented and why I’m glad we have the ability to pause things and look in greater detail.

And yet, that scene only proved to be a slight of hand by series writer Steven Moffat to distract us from the real details of the story–namely that the show could and would sneak in our first look at Jenna Louise Coleman as the new companion.   But I’m getting ahead of myself…

Lured out of hiding by the Daleks, the Doctor is forced to transport down to a planet that contains all of the Daleks that have gone insane or hated too much.   Realizing that the Doctor needs companions in order to function, the Daleks also summon Amy and Rory from their London life, just as the two are preparing to divorce and go their separate ways.  The Daleks want the Doctor to turn off the force field around the planet so they can destroy it and silence a signal coming from the planet.  Afraid of what’s waiting on the surface, the Daleks decide to use the Doctor and maybe exterminate two birds with one stone.

On the surface, the Doctor comes in contact with Oswin, the lone survivor of a crashed space ship on the planet who survives at the center of the prison.   She helps the Doctor, Amy and Rory survive and figure out how to turn off the planetary defenses.  But when the Doctor goes to rescue her to take with him, he makes a startling discovery–Oswin’s creativity and intelligence were so desired by the Daleks that she’s been transformed into one herself.

As I said before, Moffat once again pulls the rug out from under the audience, creating one expectation and then going entirely in another direction.  A planet full of Daleks driven insane is an intriguing idea–even the idea that there’s a special area for those driven mad by being defeated by the Doctor.  But in all of the cool, fan moments and shout outs to the classic and new series run, Moffat grounds the story in some very real and very authentic emotional beats.  The first is the decline of the Pond’s marriage and the reasons for it breaking down.   It could just be setting up a tragic departure for these two fan favorites, but it’s nice to see them get a moment or two of happiness before they depart the series entirely.

The other big emotional revelation is the Oswin is a Dalek and that she’s played by Jenna Louise Coleman, who will join the series full time at the holidays.  Knowing how her story ends is an intriguing idea, once again exploring Moffat’s obsession with the mechanics of time travel.   And her actions here also feed into the theme of the series of exploring more about who the Doctor really is and his desire to sink back into the shadows of the universe.   The moment when it’s revealed that Oswin wiped out not just the Doctor’s memory from those Daleks he drove insane but the Doctor’s memory from every Dalek in the fleet was nicely done.

As a long time fan and one who sampled the Big Finish stories on a sporadic basis, I can’t help but wonder if the Oswin storyline may not be a bit like that of Charlie from the eighth Doctor range.  It’s a nitpick and one that casual fans won’t pick up on (the Big Finish range is really targeted at die-hard classic series fans) but it should be interesting to compare and contrast the stories as they unfold.

But until the bigger picture comes into play, I’ll be satisfied to re-watch “Asylum of the Daleks” a few more times looking for Easter eggs I missed the first time and to comb for clues of future developments.