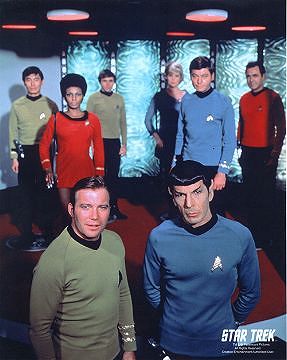 This week’s TV Club 10 over at the Onion AV Club focuses on the original (and still the best) Star Trek.

Zach Handlen (who did a review of every episode of classic Trek a couple of years ago and just finished up a look back at TNG) recommends ten “essential” episodes of classic Trek that you should see.  Here’s his list (they’re by season and in broadcast order, not a top ten list)

Balance of Terror
The Squire of Gothos
Space Seed
The Devil in the Dark
The City on the Edge of Forever
Amok Time
Mirror, Mirror
The Trouble With Tribbles
Spock’s Brain
Spectre of the Gun

It’s a solid list, but being the big Trek fan that I am, I disagree with some of the choices.

As good as “Squire” is, I’d drop it off in favor of season two’s “The Doomsday Machine.”   And while I can see that you’d include “Spock’s Brain” as one of the nadir’s of classic Trek (and the entire franchise as a whole, though it doesn’t make me shudder and want to weep like TNG‘s “Imaginary Friend” does), I think you’d be far better served to include “The Enterprise Incident” or “The Tholian Web” as examples of Trek’s third season.

I get that any list has to include “City on the Edge of Forever” as well.  However, while I like “The Trouble With Tribbles,” it’s not going to make my top ten classic Trek episodes.  It’s good, yes.  It’s funny, yes.  But for some reason, I just find it a bit overrated.  In fact, I’d almost say you could drop it and include “The Doomsday Machine” instead (original or remastered) in its slot.  I get it that it’s an iconic episode that most people cite when you mention original Star Trek to them.  But, to my mind, it’s still not as interesting or compelling as “The Doomsday Machine,” “Amok Time” or even season two’s other funny episodes “I, Mudd” or “A Piece of the Action.”

Of course, this is is just our news director’s opinion on classic Trek.  We’d love to hear what you have to think about the list.  And tell us which episodes you think are “must see” for classic Trek.