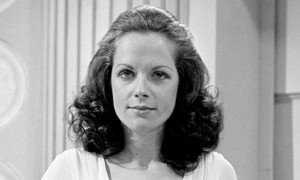 The first actress to play Romana on Doctor Who has passed away.

Mary Tamm, who played the Time Lady Romana for one season during the Tom Baker era, has passed away at the age of 62.

She had a long career on stage and screen, with roles in films including The Odessa File and The Likely Lads, and a recurring role in soap Brookside as Penny Crosbie.

She died at her home in Battersea, south west London after suffering from cancer for 18 months, agent Barry Langford said. She leaves her husband, Marcus Ringrose, daughter Lauren and seven-year-old grandson Max.

“Mary was truly beautiful in every way. She was a very spiritual lady who loved nature and adored all animals,” said Ringrose.  “On set and offstage, her earthy northern humour and self-deprecating wit brightened every occasion. She was a consummate actress, and immensely popular in the profession.”

Tamm’s parents were Estonian and she did not learn English until she went to primary school. Her first professional job was at the Birmingham Repertory Theatre where she worked alongside Derek Jacobi, Joan Sims and Ronnie Barker. From there she moved on to television work and film, her first feature film being Tales That Witness Madness with Kim Novak.

She recently starred in television series Wire In The Blood, Paradise Heights and Jonathan Creek, with stage work including Amanda in Private Lives and Beverley in Abigail’s Party.

Her last role was in EastEnders, in which she played Orlenda in 2009. Her autobiography was published the same year.

Langford, Tamm’s agent of 22 years, described her as one of his “closest friends”, and said: “She had a great zest for life. She was a fantastic actress – she played stage parts of such range, parts that would take your breath away. She could play any role, and do so wonderfully.”

He added that Tamm had been saddened by the recent deaths of contemporaries Elisabeth Sladen, who played Sarah Jane Smith in Doctor Who and died of cancer last year, and Angharad Rees, who died last weekend.